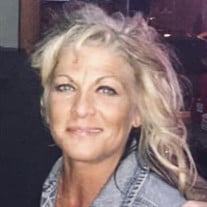 Angela Linette “Angie” Warner Walker, 50, of Drakesville, Iowa died December 29, 2020, at University of Iowa Hospitals and Clinics in Iowa City. She is now living a much better life with the Lord. She was born November 28, 1970 in Bloomfield to Tom and Cathy Hardy Warner. She married Darrin Walker on Sept. 23, 1989 and they later divorced. She graduated from Davis County High School in 1989 and became a certified nail technician through Iowa School of Beauty. She worked at several different businesses over the years, including: Piper’s Auto Salvage, Wigwam Daycare, as a nail technician, grocery store, restaurants, carpet store, and in a school cafeteria. She was a very giving person. Due to multiple chronic health conditions, she had physical limitations but she did not allow them to break her spirit. She persevered. She was so grateful to receive a kidney and pancreas transplant from a 14-year-old donor last month. It gave her a chance at a more normal life. She would want to urge everyone to please give strong consideration to organ donation if it is a possibility. She was affiliated with the Drakesville United Methodist Church. She was devoted to her family. She was a member of the American Legion Auxiliary and helped with the Davis County Old Soldiers & Settlers Reunion in the arena food shack. She also volunteered many hours running the food shack at the ball diamond in Friend, Nebraska, where she lived for many years. She was artistic and enjoyed drawing, painting, and crafting. She was also an avid sunbather, garage saler, gardener, and enjoyed canning. Surviving are her children, Reegan (Ryan) Stapaules of Fairbury, Nebraska, Tanner (Summer) Walker of Schleswig, Iowa, Dakota Walker of Denison, Iowa; four grandchildren (plus one on the way) Ian Walker, Beckham Castro, Maverick Walker all of Schleswig, Iowa, Roselynne Walker of Cozad, Nebraska; her mother, Cathy Warner of Drakesville; sister, Susie (Jay Schisel) Warner of Bonaparte, Iowa; and two brothers, Joe and Matt Warner both of Chicago, Illinois. She was preceded in death by her father, Tom Warner; grandparents, Manford and Wilda Hardy of Drakesville and Stan and Gwen Warner of Blakesburg. Please join the family in celebrating the life of Angie on Saturday, October 2, 2021 at an open house from 2-6:00 p.m. at the shelter house in the Drakesville City Park. Eulogies will be given at 2:00 p.m. if you wish to say a few words. Masks are encouraged. Light refreshments will be served.

The family of Angie Warner Walker created this Life Tributes page to make it easy to share your memories.