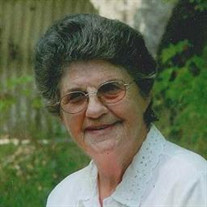 Lois Arline Mincks, 85, of Drakesville, Iowa went to live with Jesus on October 30, 2018 departing this life at the University of Iowa Hospitals and Clinics in Iowa City. She was born December 8, 1932 in Davis County, Iowa to Edward and Mildred Opal Smith Jennings. She graduated from Milton High School in 1951 and later that year married Lloyd Bodkins. The couple would later divorce. On November 24, 1956 she married Richard Mincks in Lancaster, Missouri. Richard passed away on July 7, 1976. Arline worked in several factories in the area over the years but her favorite job was selling clothing for Beeline Fashions through parties in homes. Arline had a special place in her heart for animals and had several cats, dogs, and birds. She often took in stray animals to take care of and did so with open arms. She attended Jesus is the Answer Church in Ottumwa and also hosted many worship meetings in her home. She will be missed by her family, friends, and pets. Left to share her memories are three children, Ed (Lyla) Bodkins of Jackson, Tennessee, Cindy (Mike) Campbell of Bloomfield, Ronnie (Pat) Mincks of Ottumwa; dear friend, Patty Markham of Drakesville; four grandchildren; four step-grandchildren; three great-grandchildren; 13 step-great-grandchildren; and her beloved pets. She was preceded in death by her parents; husband; daughter, Susan Jane Mincks; two great-grandchildren, Amaya Melissa McAllister, Peyton Cotter McAllister; and special guardian, Charles “Short” Long. A celebration of life with lunch and fellowship will be held at noon on Saturday, November 3, 2018 at the Wigwam Daycare Gym (Old Elementary School) in Bloomfield. Burial of the cremated remains will be at a later date at the Drakesville Cemetery. A memorial has been established to take care of her pets and checks should be made out to Cindy Campbell and mailed to 13104 Neon Ave., Bloomfield, Iowa 52537.

Lois Arline Mincks, 85, of Drakesville, Iowa went to live with Jesus on October 30, 2018 departing this life at the University of Iowa Hospitals and Clinics in Iowa City. She was born December 8, 1932 in Davis County, Iowa to Edward and Mildred... View Obituary & Service Information

The family of Arline Mincks created this Life Tributes page to make it easy to share your memories.

Lois Arline Mincks, 85, of Drakesville, Iowa went to live with...

Send flowers to the Mincks family.