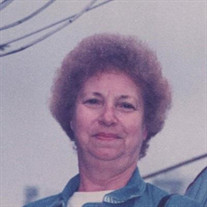 Betty Jane Wardlow Marts, 85, of Bloomfield, Iowa passed away January 9, 2016 at the Davis County Hospital. She was born June 22, 1930 in West Grove, Iowa to William Paul and Abigail Goode Wardlow. She married James Marts on August 20, 1945 in Ottumwa. He preceded her in death February 14, 2006. Betty worked as a nurse’s aide for many years at the Davis County Hospital and especially enjoyed her time spent working in the OB Department. She was a member of the Bloomfield Christian Church. She is survived by three daughters, Nikki Yearns of Queen City, Missouri, Connie West of Bloomfield, Joni Hamm of Ottumwa, Iowa; ten grandchildren; 19 great-grandchildren; four great-great-grandchildren; and many nieces and nephews. She was preceded in death by her parents; husband; daughter, Marcia; granddaughter, Angie Hamm; son-in-law, Bob West; five sisters, Sylvia Wardlow, Lovell Worrell, Eva Weiss, Bernadine Fountain, Ina Amato; and five brothers, Paul Jr., Billy, Benny, Lee, and Wray Wardlow. Funeral services will be at 11:00 a.m. on Thursday, January 14, 2016 at the Wagler Funeral Home in Bloomfield with Pastor Jack Knox officiating. Cremation will follow the service and burial of the cremated remains will be at a later date at the IOOF Cemetery in Bloomfield. Visitation will begin at 9:00 a.m. on Thursday with the family present to greet friends from 10:00 a.m. until the time of the service. A memorial has been established to the family.

The family of Betty Jane Marts created this Life Tributes page to make it easy to share your memories.

Send flowers to the Marts family.