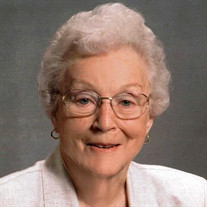 Betty Shumate, 88, of Bloomfield, Iowa passed away December 2, 2016 at her home. She was born April 12, 1928 in Oskaloosa, Iowa to Harlan and Florence Bollman Baughman. She married Burton Shumate on November 23, 1947 at the Bloomfield United Methodist Church. He passed away on October 4, 1983. Betty attended school in Pulaski, graduating in 1946. She farmed with her husband for 35 years and also worked as an elementary school secretary for the Davis County Community Schools, retiring in 1992. She was a member of the Bloomfield United Methodist Church, United Methodist Women, and Reed-Whisler Post #78 Legion auxiliary where she served as an officer and in several 5th district officer positions. Betty volunteered at the Davis County Welcome Center where she served as an officer for several years. She was also a member of the Merry Widows Card Club and the Rosey Red Hatters. In her free time, she enjoyed piecing quilts and watching a good football game. Betty was also a blood donor, having donated over six gallons in her lifetime. She is survived by a son, Rodney (Lynn) Shumate of Bloomfield; daughter, Sharry (Mike) Humphrey of Bloomfield; five grandchildren, Jeff (Cindy) Shumate of Mt. Zion, Illinois, Joel (Linda) Shumate of Bloomfield, Holly (Justin) Newberry of Danville, Iowa, Heather (Vince) Nelson of Burlington, Iowa, Casey (Brooke) Humphrey of Burlington, Iowa; ten great-grandchildren, Logan, MacKenzie, and Peyton Shumate, Sawyer and Spencer Nelson, Delaney, Dylan, and Darby Newberry, Brady and Paige Humphrey; sister, Marlene Hayes of Bourbonnais, Illinois; brother, Mike (Debbie) Baughman of Pulaski; sister-in-law, Carolyn Baughman of Des Moines, Iowa; and several nieces and nephews. She was preceded in death by her parents; husband; two sisters, Norma Lee Harl, Sharon Bruns Augspurger; and a brother, Jim Baughman. Funeral services will be at 10:30 a.m. on Tuesday, December 6, 2016 at the Wagler Funeral Home in Bloomfield with Rev. Donna Olinger officiating. Cremation will follow the service and burial of the cremated remains will be at the Pulaski Cemetery in Pulaski, Iowa at a later date. Visitation will begin at 9:00 a.m. on Monday with the family present to greet friends from 5-7:00 p.m. at the funeral home. A memorial has been established to the Friends of the Bloomfield Public Library and the Pulaski Avenue of Flags.

Betty Shumate, 88, of Bloomfield, Iowa passed away December 2, 2016 at her home. She was born April 12, 1928 in Oskaloosa, Iowa to Harlan and Florence Bollman Baughman. She married Burton Shumate on November 23, 1947 at the Bloomfield United... View Obituary & Service Information

The family of Betty Shumate created this Life Tributes page to make it easy to share your memories.

Send flowers to the Shumate family.