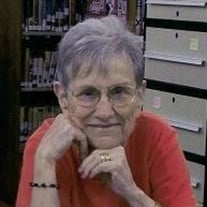 Billie Marijean Dewes, 82, of Bloomfield, Iowa passed away August 24, 2015 at her home. She was born January 17, 1933 in Decatur, Illinois to Roy William and Eva G. Woodall Dickson. She married Francis H. Dewes October 14, 1950 in Lowell, Indiana. He preceded her in death April 22, 2012. Billie was a devoted farm wife, grandmother, and great-grandmother. She worked at the Bloomfield Public Library as the Children’s Librarian and became an unofficial grandmother to many children in Davis County. While working at the library she coordinated story hour and the summer reading program, read to children at school, and helped countless children find just the right book to read. She also delivered books to shut-ins throughout Davis County. While away from work, she enjoyed golfing, reading, fishing, and crocheting. She is survived by her son, Gene (Lori) Dewes of Bloomfield, Iowa; three daughters, Pam (John) Strachan, Vicki (Jake) Scott both of Bloomfield, Janna Sue (Bruce) May of Bonne Terre, Missouri; 18 grandchildren; and 17 great-grandchildren. She was preceded in death by her parents; husband; son, Allen Roy Dewes; three brothers; and two sisters. A Celebration of Life with family present to greet friends will be from 4-6:00 p.m. on Saturday, August 29, 2015 at the Wagler Funeral Home in Bloomfield. The body has been cremated and no services are planned. In lieu of flowers, memorials have been established to the Friends of the Bloomfield Public Library and Good Samaritan Hospice.

The family of Billie Dewes created this Life Tributes page to make it easy to share your memories.

Send flowers to the Dewes family.