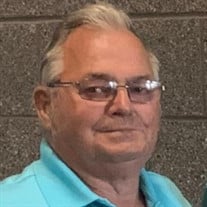 Robert Lee "Bob" Shepherd, 73, of Bloomfield, Iowa passed away on September 5, 2020 at MercyOne Des Moines Medical Center. He was born March 20, 1947 in Ottumwa, Iowa to Charles and Pearl Evelyn Pherigo Shepherd. He served in the U.S. Army during the Vietnam War. On December 7, 1968, he married Peggy Garrett in Milton, Iowa. The couple settled in Bloomfield and raised two children; Scott and Jennifer. Bob worked for Bloomfield Bridge and Culvert for 26 years, Davis County Schools for 14 years, and finished his working career at Waste Management where he spent 15 years. He also owned Bob's Snow and Mow. He was a member of Reed-Whisler Post #78 of the American Legion in Bloomfield. In his free time, he collected pedal cars and enjoyed old trucks and cars. Bob loved spending time with his family, they were the most important part of his life. He was so proud of his grandchildren and great-grandchildren and spent as much time with them that he could. He will be greatly missed by his family and friends. He is survived by his wife, Peggy Shepherd of Bloomfield; son, Scott (Gail Hayes) Shepherd of Boone, Iowa; daughter, Jennifer (Ron) Moore of Bloomfield; six grandchildren, Shelby (Cole) Richards, Bailey (Kevin Simon) Shepherd, Jeana Shepherd, Rory (Makenna Simons) Shepherd, Phoebe Moore, Parker Moore; five great-grandchildren, Hallee, Chesney, and Zeppelin Richards, Zane and Arlo Strabley; two sisters, Kate (John) Yochum, Karen Dalbey both of Ottumwa; two brothers, Hank Shepherd, David (Laura) Shepherd both of Ottumwa; and lots of nieces and nephews. He was preceded in death by his parents; parents-in-law, Arthur and Jessie Garrett; six brothers; six sisters, and five brothers-in-law. Funeral services will be at 11:00 a.m. on Thursday, September 10, 2020 at the Wagler Funeral Home in Bloomfield with Pastor Jon Klaus officiating. Burial will be at the IOOF Cemetery in Bloomfield. Military rites will be performed by Reed-Whisler Post #78 - American Legion. Visitation will begin at 1:00 p.m. on Wednesday with the family present to greet friends from 5-7:00 p.m. at the funeral home. Social distancing will be followed and masks are encouraged for all services. In lieu of flowers, a memorial has been established to his family with designation for a local organization at a later date. Online condolences may be directed to www.waglerfuneralhome.com.

The family of Bob Shepherd created this Life Tributes page to make it easy to share your memories.

Send flowers to the shepherd family.