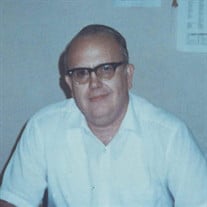 Bobby Dean Pottorff, 83, of Bloomfield, Iowa passed away on February 9, 2020 at the Bloomfield Care Center. He was born August 12, 1936 in Bloomfield to Glen and Reva Bales Pottorff. He married Joyce Veatch in Davis County and out of that union, two children were born, Diane and Melinda. The couple later divorced. In 1994, he married Sandra Huff Oliver in Davis County. Bobby’s first employer was Nardini’s Grocery in Bloomfield. He later worked for the Bloomfield Newspaper as a linotype operator, at Keith’s IGA, as a custodian for Davis County High School, and then in 1974 he was elected as Davis County Recorder where he served for 25 years, retiring in 1999. In his free time, Bobby enjoyed playing cards, BINGO, and taking an occasional trip to the casino. He especially loved spending time with his family and grandchildren. He was a member of Bloomfield Jaycees, Izaak Walton, and the Iowa County Recorder’s Association. He is survived by his wife, Sandra Pottorff; two daughters, Diane (Gail) Padget of Belknap, Melinda (Dallas) Garmon of Bloomfield; four step-sons, Jerry (Heather) Oliver, David (Tina) Oliver, Rob (Stacey) Oliver all of New London, Iowa, Mike (Tonya) Oliver of Pulaski, Iowa; 13 grandchildren; eleven great-grandchildren; two nephews, Brian Pottorff, Dennis Thompson; and a niece, Kathy Pottorff. He was preceded in death by his parents; two sisters, Leona Thompson, Lovena Henderson; brother, Delbert Pottorff; and a niece, Karen Pottorff. Funeral services will be at 11:00 a.m. on Thursday, February 13, 2020 at the Wagler Funeral Home in Bloomfield with Pastor Matt Froah officiating. Burial will be at the IOOF Cemetery in Bloomfield. Visitation will begin at 1:00 p.m. on Wednesday with the family present to greet friends from 5-7:00 p.m. at the funeral home. In lieu of flowers, a memorial has been established to Good Samaritan Society Hospice.

Bobby Dean Pottorff, 83, of Bloomfield, Iowa passed away on February 9, 2020 at the Bloomfield Care Center. He was born August 12, 1936 in Bloomfield to Glen and Reva Bales Pottorff. He married Joyce Veatch in Davis County and out of that... View Obituary & Service Information

The family of Bobby Pottorff created this Life Tributes page to make it easy to share your memories.

Bobby Dean Pottorff, 83, of Bloomfield, Iowa passed away on February...

Send flowers to the Pottorff family.