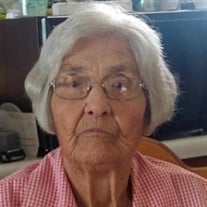 Bonnie Lee (Scott) Burress, 97, of Floris, Iowa passed away on January 11, 2022 at the Ottumwa Regional Health Center in Ottumwa, Iowa. She was born on August 6, 1924 to Robert Harley Scott and Jessie Christabell (Kinkade) Scott. In 1942, Bonnie graduated from Sewal High School in Sewal, Iowa (Wayne County). While in high school, Bonnie attended some college classes and taught in a one-room school house for four years. She married James Marion Burress on August 18, 1944, in Troy, Kansas. Gas was being rationed at the time Bonnie got married; thus, her father gave Bonnie his gas ration. During World War II, James enlisted in the United States Army on January 23, 1941 and Bonnie worked in the Ordinance Plant in Des Moines, Iowa. Bonnie worked as an aide at the Davis County Hospital in the OB department for many years. She enjoyed spending time with her family, quilting, and working on embroidery projects. Bonnie was always outside helping James and much preferred to be doing that then puttering around the house. Her family will remember that she was a good-natured person, independent, and throughout the years her family grew as more people came into her life. She was a member of the Eldon Lioness Club for many years. She is survived by five children, Doris Long of West Des Moines, Iowa, Barbara (Donnie) Proctor of Norwalk, Iowa, Robert (Paula) Burress of Bloomfield, Iowa, Lee (Loretta) Burress of Columbus Junction, Iowa, Jearld (Vicki) Scott of Bloomfield; eleven grandchildren; 26 great-grandchildren; and a sister, Phyllis Gill of Davenport, Iowa. She was preceded in death by her parents; husband, James; son-in-law, Jerry Saunders; two sisters, Imogene Levis, Rose Hecker; two brothers, Thomas Scott, Harry Scott; and one great-granddaughter, Kinsley Grace Burress. Funeral services will be at 11:00 a.m. on Friday, January 21, 2022 at the Wagler Funeral Home in Bloomfield with Pastor Mel Kendall officiating. Burial will be at the Floris Cemetery. A visitation was held on Monday, January 17, 2022. A memorial has been established to TSC Alliance.

Bonnie Lee (Scott) Burress, 97, of Floris, Iowa passed away on January 11, 2022 at the Ottumwa Regional Health Center in Ottumwa, Iowa. She was born on August 6, 1924 to Robert Harley Scott and Jessie Christabell (Kinkade) Scott. In 1942, Bonnie... View Obituary & Service Information

The family of Bonnie Burress created this Life Tributes page to make it easy to share your memories.

Send flowers to the Burress family.