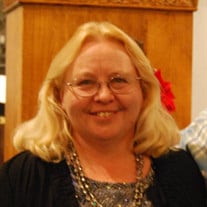 Brenda Lee Howk, 61, of Bloomfield, Iowa, passed away on June 19, 2022 at Mercy Medical Center in Des Moines, Iowa surrounded by her family after a courageous fight with breast cancer. She was born on February 12, 1961 in Milton, Iowa to Allen and Laree Downing Huff. She graduated from Fox Valley High School in 1979. On February 20, 1981, she married Harry Howk in Bloomfield. The couple raised four children; Jake, Whitney, Kacey, and Charity. Brenda dedicated her life to supporting her children in various horse-related hobbies. During her life she was passionate about supporting her children in 4-H, horse shows, youth rodeos, the National High School Rodeo Association and the Davis County Saddle Club. Brenda was a rural mail carrier in the Milton area for over 25 years. She loved her job and all the people on her route. She attended the First Pentecostal Assembly of God in Ottumwa, Iowa and supported ministries that empowered youth to follow Jesus. She loved her horses, ponies, dogs and cats. Brenda was known for her sense humor, kind heart and her generosity of giving gifts to others. Her greatest joy in life was being Mimi to her five precious grandchildren. She is survived by her husband, Harry Howk; son, Jake (Kate Austin) Howk of Eldora, Iowa; her three girls, Whitney Howk of Cameron, Missouri, Kacey (Logan) Edgar, of Bloomfield, Charity Howk of Bloomfield; five grandchildren, Cactus Edgar, Canyon Edgar, Paige Howk, Molly Howk, Aoife Howk; six brothers, Larry (Mary) Downing of Milton, Robert (Connie) Huff of Ottumwa, Jon (Theresa) Huff of Milton, Don (Kathy) Huff of Cantril, Iowa, Arthur Huff of Milton, Curtis (Susan) Huff of Cantril; two sisters, Sandra Pottorff of Bloomfield, Deborah (William) Boatman of Ottumwa; 44 nieces-and-nephews; and so many friends who have become like family through her rodeo, work, and travels. She was preceded in death by her father, Allen Huff; two brothers, Jerry Lee Huff, Danny Dale Huff; and her grandparents. Funeral services will be at 10:00 a.m. on Friday, June 24, 2022 at the Wagler Funeral Home in Bloomfield with Pastor Richard Schlotter officiating. Burial will be at the Sunnyside Cemetery in Milton. Visitation will begin at noon on Thursday with the family present to greet friends from 5-7:00 p.m. at the funeral home. Spreading the Gospel through youth organizations and rodeo was always very important to Brenda. For this reason, memorials may be made to Chariton Hills Rodeo Bible Camp. Online condolences may be directed to www.waglerfuneralhome.com.

Brenda Lee Howk, 61, of Bloomfield, Iowa, passed away on June 19, 2022 at Mercy Medical Center in Des Moines, Iowa surrounded by her family after a courageous fight with breast cancer. She was born on February 12, 1961 in Milton, Iowa to Allen... View Obituary & Service Information

The family of Brenda Howk created this Life Tributes page to make it easy to share your memories.

Brenda Lee Howk, 61, of Bloomfield, Iowa, passed away on June...

Send flowers to the Howk family.