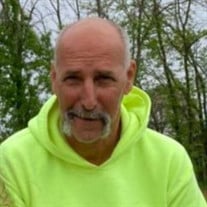 Bryan Ted Moore, 62, of rural Bloomfield, Iowa passed away on June 10, 2022 at the University of Iowa Hospitals and Clinics following a medical emergency. He was born on December 8, 1959 in Bloomfield, Iowa to Roland and Barbara Bailey Moore. He graduated from Davis County High School in 1978 and married high school sweetheart, Peggy Hill, on July 14, 1978 in Bloomfield. The couple lived in Davis County and raised three children; Clayton, Erin, and Debbie. After school, Bryan worked for Warning Electric before taking a job with American Tank and Welding when they first opened. He was proud to be the second person hired at American Tank and Welding and worked there for over 27 years until the business closed. He then went to work for Davis County Secondary Roads and worked there for nine years until his health began to fail. Bryan was a hard worker and enjoyed being around his co-workers. He also had a small century farm that kept him busy. Bryan was an outdoorsman who loved to go hunting and fishing with friends and family. He enjoyed rock hunting, arrowhead hunting, woodworking, riding around on the farm in his Ranger, watching storms from the porch swing, and mushroom hunting. He especially loved spending time with his grandchildren and going to "Abby's Cabin." He was always willing to help others with various welding jobs or building and wiring houses. Bryan stayed active all the time and wasn't one to sit. He will be greatly missed by his family, friends, and co-workers. He is survived by his wife, Peggy Moore of Bloomfield; three children, Clayton (Molly) Moore of Drakesville, Iowa, Erin (Adam) Humble of Mt. Pleasant, Iowa, Debbie (Frank) Boyer of Floris, Iowa; six grandchildren, Laynee, Aiden, Porter, Emma, Olivia, Brooke; mother, Barbara Moore of Bloomfield; sister, Susan (Eric) Knapp of Bloomfield; and numerous nieces, nephews, and cousins. He was preceded in death by his father. Funeral services will be at 9:30 a.m. on Tuesday, June 14, 2022 at the Wagler Funeral Home in Bloomfield with Pastor Jon Klaus officiating. Visitation will begin at noon on Monday with the family present to greet friends from 5-7:00 p.m. at the funeral home. Cremation with a private family committal service will be held at a later date. A memorial has been established to the Muscular Dystrophy Association.

Bryan Ted Moore, 62, of rural Bloomfield, Iowa passed away on June 10, 2022 at the University of Iowa Hospitals and Clinics following a medical emergency. He was born on December 8, 1959 in Bloomfield, Iowa to Roland and Barbara Bailey Moore.... View Obituary & Service Information

The family of Bryan Moore created this Life Tributes page to make it easy to share your memories.

Bryan Ted Moore, 62, of rural Bloomfield, Iowa passed away on...