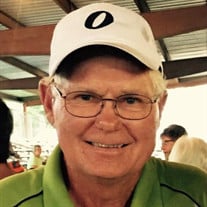 Clarence Dale Bogle, 82, of rural Bloomfield, Iowa passed away on November 11, 2020 at Harry S. Truman Memorial Veterans’ Hospital in Columbia, Missouri. He was born August 9, 1938 in Moulton, Iowa to Clarence and Virgil Farley Bogle. He served in the Army and was proud of his service time. In 1961, he married Joyce Marshall in Lancaster, Missouri. They lived in West Branch for several years and Dale worked for the Rock Island Railroad. In 1972, they purchased a farm and moved to Davis County. Dale farmed and milked cows for several years. He owned a fence building company for many years also. Dale was an outdoorsman at heart. He loved to golf, hunt, fish, shoot guns, and was an avid bird hunter. He also enjoyed spending time with people and his family. He was a member of the Bloomfield and Lancaster Country Clubs. He is survived by his wife, Joyce Bogle; daughter, Kyndal (Alan) Bodkins of Bloomfield; two granddaughters, Brooke Bodkins of Bloomfield, Blair (Nathan Gerlach) Bodkins of Springbrook, Iowa; brother, Gale (Linda) Bogle of Agency, Iowa; and three sisters, Carolyn (Martin) Shook of Des Moines, Iowa, Lynn (Brad) Brobisky of Austin, Texas, Rosalind Cole of Thurmond, North Carolina. He was preceded in death by his parents; sister, Shirley Chapman; and three brothers, Thomas, Davey, and Bruce Bogle. Funeral services will be at 10:00 a.m. on Monday, November 16, 2020 at the Wagler Funeral Home in Bloomfield with Pastor R.J. Montis officiating. Military rites will be performed at the funeral home by Reed-Whisler Post #78 of the American Legion. Cremation will follow the service and burial of the cremated remains will be at the Coatesville Cemetery at a later date. Visitation will begin at noon on Sunday with the family present to greet friends from 3-5:00 p.m. at the funeral home. Masks are required for the visitation and funeral service. Memorials have been established to the Lancaster Country Club and Reed-Whisler Post #78 of the American Legion in Bloomfield. Online condolences may be directed to www.waglerfuneralhome.com.

The family of C. Dale Bogle created this Life Tributes page to make it easy to share your memories.

Send flowers to the Bogle family.