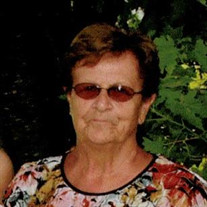 Carol Joan Blackwell, 76, of rural Bloomfield, Iowa passed away August 25, 2015 at the Keosauqua Health Care Center. She was born May 21, 1939 in Good Hope, Illinois to Everett and Mildred Riggs Dugger. She married Rex Blackwell August 3, 1981 in Milton, Iowa. Carol worked as a secretary for the Fox Valley School System for 18 years and was also a farm wife. Carol loved working in her yard growing flowers and landscaping. She also made several types of crafts, especially Christmas decorations, and would sell them at craft shows. Later in life she enjoyed going to various casinos and playing slot machines. She is survived by her husband; step-daughter, Becky Blackwell of Columbia, Missouri; granddaughter, Allison (Dustin) Gonterman of Birmingham, Iowa; step-grandson, Ryan Blackwell of Columbia; great-grandson, Carter Gonterman; son-in-law, Dave Doerscher of Bloomfield; and a sister-in-law, Betty Dugger of Memphis, Missouri. She was preceded in death by her parents; daughter, Cindy Doerscher; and brother, Bob Dugger. A memorial service will be held at 10:00 a.m. on Saturday, September 5, 2015 at her home at 26372 240th St., Bloomfield, Iowa. Pastor Darrell Zook will be officiating and there will be time for family and friends to share memories of Carol during the service. The family encourages attendees to bring lawn chairs with them as the plan is to have the service outside in the yard that Carol loved so much. In lieu of flowers, a memorial has been established to the family with plans to donate the money in Carol’s name at a later date.

The family of Carol Blackwell created this Life Tributes page to make it easy to share your memories.

Send flowers to the Blackwell family.