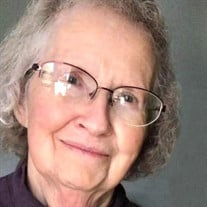 Carole Elaine (Wixom) Eller, 80, of Denison, Iowa and former resident of Bloomfield, Iowa passed away March 4, 2022 at the Denison Care Center. She was born on September 1, 1941 in Bloomfield, Iowa to Roy Lavern and Shirley Mae Goldizen Howard. She graduated from Bloomfield High School. She married Robert Wixom and later their marriage was dissolved. Carole married Thomas Eller in June 2017 in Bloomfield. Carole worked in home health for many years and worked on the family farm helping with the daily chores and taking care of cattle. She was a member of the Grace Pointe Church of the Nazarene in Bloomfield where she served as Treasurer for many years and later the Zion Lutheran Church in Denison. She was a dedicated student of the Bible and possessed an insightful mind. She enjoyed watching Wheel of Fortune and was adept at solving the puzzles. Carole was incredibly strong in the faith and love. She will be greatly missed by her family and friends. She is survived by her husband, Thomas Eller; son, Bradley (Jennifer) Wixom of Sutter, Illinois; six grandchildren, Amie (David) Clawson of Keosauqua, Iowa, Wendy Wixom of Fairfield, Iowa, Ben Wixom of Bonaparte, Iowa, Sarah Wixom of Urbandale, Iowa, Drew Wixom of Sutter, Illinois, Maddy Wixom attending a university in St. Louis; two great-granddaughters, Aurora and Ember; and daughter-in-law, Beverly Wixom of Fairfield, Iowa. She was preceded in death by her parents; son, Rev. Bryon Wixom; and two sisters, Connie Eller, Carolyn Howard. Funeral services will be at 10:30 a.m. on Friday, March 11, 2022 at the Wagler Funeral Home in Bloomfield with Pastor R.J. Montis officiating. Burial will be at the Drakesville Cemetery in Drakesville, Iowa. Visitation will be on Friday from 9:45 a.m. until the time of the service at the funeral home. A memorial has been established to the Grace Pointe Church of the Nazarene.

The family of Carole (Wixom) Eller created this Life Tributes page to make it easy to share your memories.