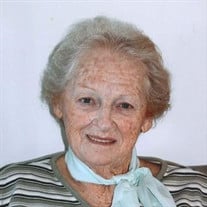 Carolyn May Lawson, 79, of rural Bloomfield, Iowa died February 23, 2016. She was born May 1, 1936 in Davis County, Iowa to Kenneth Paul and Margaret Maurine Barkley Johnson. She married Dwight Lawson on September 25, 1954 in Davis County, Iowa. Carolyn had worked as a secretary in the Administration Building for Davis County Schools and the newspaper office in Lancaster, Missouri. She was also a farm wife and decorated cakes. In her spare time, Carolyn enjoyed sewing, quilting, cooking, oil painting, gardening, and canning. She loved spending time with her family and especially her grandchildren. Carolyn was a member of the Monterey Christian Church. She is survived by her mother, Margaret Johnson of Bloomfield; husband, Dwight Lawson; two daughters, Beverly Thomas of Des Moines, Iowa, and Teresa Lawson of Ottumwa, Iowa; two sons, Dean Lawson and Eddy Lawson both of Bloomfield, Iowa; three grandchildren, Jessica Lawson of Bloomfield, Samantha Lawson of Yale, Iowa, and Taylor Lawson of Ottumwa; sister, Diane (Dennis) Wright of Ames, Iowa; and several nieces and nephews. She was preceded in death by her father and two brothers, David and Gale Johnson. Funeral services will be at 10:00 a.m. on Monday, February 29, 2016 at the Wagler Funeral Home in Bloomfield with Pastor Jack Knox officiating. Burial will be at the Washington Cemetery in Davis County. Visitation will begin at 9:00 a.m. on Sunday with the family present to greet friends from 3-5:00 p.m. at the funeral home. A memorial has been established to her family.

The family of Carolyn Lawson created this Life Tributes page to make it easy to share your memories.

Send flowers to the Lawson family.