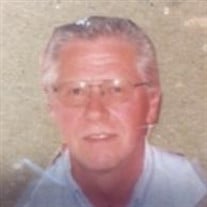 Charles Calvin “Charlie” Spargur, 77, of Bloomfield, Iowa passed away on April 6, 2019 at the Bloomfield Care Center. He was born September 17, 1941 in Kirksville, Missouri to Walter B. and Mary O. Alexander Spargur. When young, Charles was a Boy Scout. Three days after graduating from Bloomfield High School in 1959, he was in San Diego California in Navy boot camp. During his three years in the Navy, he served on the USS Prairie as a radioman. After his discharge in 1962, he worked as a nurse’s aide at the Davis County Hospital while interning under Dr. Meyers as an X-ray technician. He worked as a technician for ten years. In 1963, he married Jane Fresh. They had two children, Debra and Tony. They later divorced. Charlie married Karen Griffith on April 26, 1985 in Osage Beach, Missouri. Charlie worked for Bruce’s Furniture, AB Dick and Harris Motors. In 1980, he began working for Quality Motors and worked there until he became ill in 2008. In 2016, after a lengthy illness, Charlie moved to the Bloomfield Care Center. Karen visited him almost every day and was with him when he passed away. Charlie enjoyed car races, golfing and hunting. He was also a member of the Bloomfield Christian Church and Reed-Whisler Post #78 of the American Legion. He was the Commander of the Legion for four years and often helped at Bingo. Surviving Charlie are his wife, Karen Spargur; son, Tony (Jennifer) Spargur of Bloomfield; son-by-marriage, Kirk Griffith of Durango, Colorado; daughter-by-marriage, Elizabeth (Tim) Walgamuth of Missouri City, Texas; three granddaughters, Sydney, Sophie and Sadie Spargur of Bloomfield; grandson, Zachary Walgamuth of Houston, Texas; brother-in-law, Jerry (Beth) Van Horn of Crete, Nebraska; sister-in-law, Joan Spargur of Belleville, Illinois; three nieces; and three nephews. Those who preceded him in death are his parents; daughter, Debra Spargur; brother, Robert Spargur; and brother-in-law, Nicholas Van Horn. According to his wishes, Charlie was cremated and a visitation will be held at Wagler Funeral Home in Bloomfield on April 26, 2019 from 1-3:00 p.m. A military salute will be presented at the funeral home at 12:45 by Reed-Whisler Post #78. Memorials have been established to the Reed-Whisler Post #78 Scholarship Fund or the Bloomfield Christian Church and may be mailed to Karen Spargur, 402 E. South St. Apt. D-1, Bloomfield, Iowa.

The family of Charlie Spargur created this Life Tributes page to make it easy to share your memories.

Send flowers to the Spargur family.