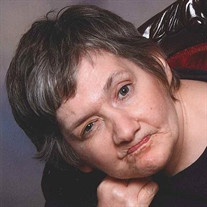 Charlotte L. Forsythe, 63, of Bloomfield, Iowa passed away January 13, 2017 at the Bloomfield Care Center. She was born on November 21, 1953 in Bloomfield to Gerald LaVern and Nina Marcella Humphreys Forsythe. Charlotte was one of God’s special children who was limited in life skills. She could not verbalize her thoughts and feelings, however, due to her facial expressions and expressive eyes, she was able to get her point across. She loved small children, animals, music, going on car rides, and attending family gatherings. Charlotte participated at the First Resources Workshop, volunteered at the Davis County Day Care Center and at the Davis County Elementary School where she enjoyed her interactions with the children. She is survived by her mother, Nina Forsythe of Bloomfield; sisters and brothers, Sandra (Glen) Hubbartt of Glen Carbon, Illinois, Marcella (Tommy) Thompson of Bloomfield, Linda (Melvin) Wilfawn of Fairfield, Iowa, Teresa (Jack) Moss of Bloomfield, Iowa, Nolen (Linda) Forsythe of Oskaloosa, Iowa; and numerous nieces and nephews. She will be joining her father, Gerald; niece, Maiya Nabor; and her sister-in-law, Kay Forsythe in Heaven. Funeral services will be at 10:30 a.m. on Wednesday, January 18, 2017 at the Wagler Funeral Home in Bloomfield with Pastor Jack Knox officiating. Burial will be at the IOOF Cemetery in Bloomfield. Visitation will begin at 9:00 a.m. on Wednesday with the family present to greet friends from 9:30 a.m. until the time of the service at the funeral home. In lieu of flowers, a memorial has been established to the Association for Retarded Citizens of Jefferson and Nearby Counties.

Charlotte L. Forsythe, 63, of Bloomfield, Iowa passed away January 13, 2017 at the Bloomfield Care Center. She was born on November 21, 1953 in Bloomfield to Gerald LaVern and Nina Marcella Humphreys Forsythe. Charlotte was one of God&#8217;s... View Obituary & Service Information

The family of Charlotte Forsythe created this Life Tributes page to make it easy to share your memories.

Send flowers to the Forsythe family.