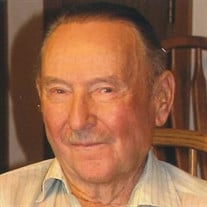 Clair Douglas Rodgers, 86, of Bloomfield, Iowa passed away on March 15, 2018 at the Northeast Regional Medical Center in Kirksville, Missouri. He was born September 4, 1931 in Norristown, Pennsylvania to Stanley Clair and Mabel “Mimi” Elizabeth Schock Rodgers. He married Mary Ann White in 1954. She passed away on February 19, 1976. Clair graduated from Iowa State University in 1955 with a degree in Animal Science and used that knowledge to operate a farm in Davis County where he raised various livestock and crops. While not farming, he enjoyed watching football and basketball, listening to Rush Limbaugh, rooting for the Iowa Hawkeyes, and taking fishing trips with his family to Minnesota. He stayed busy within the community as a member of Reed-Whisler Post #78 of the American Legion in Bloomfield, the Troy Methodist Church, and Ottumwa Lodge #16 A.F. & A.M. Clair was especially proud of serving in the U.S. Army during the Korean War. He is survived by two sons, Kirk (Ronda) Rodgers of Troy, Greg (Charlotte) Rodgers of Bloomfield; four grandchildren, Miranda (Chris) Beebe of Troy, Cassie Rodgers of Troy, Myles and Jaylee Rodgers of Bloomfield; great-grandson, Huxyn Beebe and another great-grandson on the way in May; brother, Curtis Rodgers of Huntsville, Missouri; and several nieces and nephews. He was preceded in death by his parents and wife. Funeral services will be at 10:00 a.m. on Tuesday, March 20, 2018 at the Wagler Funeral Home in Bloomfield with Rev. Donna Olinger officiating. Burial with military rites performed by Reed-Whisler Post #78 of the American Legion will be at the Troy Cemetery. Visitation will begin at 11:00 a.m. on Monday with masonic services held at 6:00 p.m., followed by visitation with family present to greet friends until 8:00 p.m. at the funeral home. A memorial has been established to the Davis County “A” Club and the Troy Methodist Church.

Clair Douglas Rodgers, 86, of Bloomfield, Iowa passed away on March 15, 2018 at the Northeast Regional Medical Center in Kirksville, Missouri. He was born September 4, 1931 in Norristown, Pennsylvania to Stanley Clair and Mabel &#8220;Mimi&#8221;... View Obituary & Service Information

The family of Clair Rodgers created this Life Tributes page to make it easy to share your memories.

Clair Douglas Rodgers, 86, of Bloomfield, Iowa passed away on...

Send flowers to the Rodgers family.