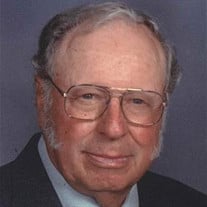 Clarence “Joe” George Klodt, 93, of rural Milton, Iowa passed away on October 3, 2018, at 6:32 p.m. under hospice care at the Van Buren County Hospital in Keosauqua, Iowa. He was born October 28, 1924, at home on the family farm south of Troy, Iowa to George A. and Emma R. Birchmier Klodt. He married Donna A. Summers on February 2, 1953, at St. Patrick’s Catholic Church in Ottumwa, Iowa. Clarence grew up on the family farm where he was born. He attended Troy Consolidated School and graduated in 1942. He drove a school bus for eight years, starting at age 16. He served in the U.S. Army during the Korean Conflict. Clarence and Donna lived on their farm north of Milton where they farmed and raised livestock. He became involved in restoring Mustang cars, pedal cars, pedal tractors, and old John Deere tractors. He was a charter member of Collector Cars Unlimited of Fairfield, Iowa and Iowa-Missouri Ford Club, and an honorary member of South Iowa Mustang Club of Pella, Iowa. Clarence was a charter member of St. Mary Magdalen Catholic Church in Bloomfield. Surviving are his wife, Donna; two daughters, Debbie Klodt of Des Moines, Ginger (Larry) Austin of Grinnell, Iowa; son, Brad Klodt of Milton; grandson, Corey (Heather) Austin of Farmington, Iowa; granddaughter, Erin Austin of Grinnell; and three great-granddaughters, Kaylei Moore and Kloei Austin both of Owensboro, Kentucky, and Charli Reid of Ottumwa. He was preceded in death by his parents and brother, Laurence Klodt. Funeral services will be at 10:30 a.m. on Wednesday, October 10, 2018, at the Wagler Funeral Home in Bloomfield with Father Patrick Hilgendorf officiating. Burial will be at the Troy Cemetery. Visitation will begin at 11:00 a.m. on Tuesday with the family present to greet friends from 5-7:00 p.m. at the funeral home. A memorial has been established to the Van Buren County Hospital.

The family of Clarence "Joe" Klodt created this Life Tributes page to make it easy to share your memories.

Send flowers to the Klodt family.