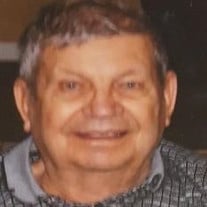 Dale Leroy Downing, 88, of Mexico, Missouri and former resident of Davis County, Iowa passed away on July 21, 2018 at the Missouri Veterans Home in Mexico, Missouri. He was born March 30, 1930 in Davis County, Iowa to Roy Maine and Myra Irene Kinney Downing. He married Catherine Leona Lagle on September 24, 1949 in Van Buren County, Iowa. The couple lived on a farm in the Troy, Iowa area for many years and raised two daughters, Kathy and Teresa. Later in life they moved to Bloomfield and then to Ottumwa. Catherine passed away on February 13, 2005. Dale was a farmer raising crops and livestock. He also sold used farm equipment to area farmers for many years. In his free-time he enjoyed fishing, coon hunting, riding mules, camping, and riding motorcycles. He was a member of the United Methodist Church and attended church in Troy and Ottumwa. Dale was a veteran and proudly served in the U.S. Army. He is survived by two daughters, Kathy Krog of Kirksville, Missouri, Teresa (Stan) Johnson of Tomah, Wisconsin; four grandchildren, William (Andrea) Krog of Clarence, Missouri, Larry (Holly) Krog of Huntsville, Missouri, Quinn (Jeff) Marx of Dane, Wisconsin, Jenna (Derek) Burnstad of Tomah, Wisconsin; nine great-grandchildren; and a brother, Jerry Downing of Fayette, Missouri. He was preceded in death by his parents; wife; sister, Mary Hershey; brother-in-law, Larry Hershey; and sister-in-law, Anna Downing. Funeral services will be at 10:00 a.m. on Wednesday, July 25, 2018 at the Wagler Funeral Home in Bloomfield with Rev. Jon Disburg officiating. Burial with military rites performed by Reed-Whisler Post #78 of the American Legion will be at the IOOF Cemetery in Bloomfield. Visitation will begin at noon on Tuesday with the family present to greet friends from 5-7:00 p.m. at the funeral home. A memorial has been established to the Missouri Veterans Home in Mexico, Missouri.

The family of Dale Downing created this Life Tributes page to make it easy to share your memories.