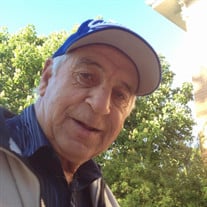 Donald D. Carrier, 85, of Columbia, Missouri and former resident of Davis County, Iowa passed away on April 23, 2022 at the Boone Hospital Center in Columbia. He was born on April 8, 1937 in Appleton City, Missouri to Willis Linwood and Freda Juanita Crawford Carrier. He graduated from Bloomfield High School in 1955. On September 10, 1960, Donald married Virginia Mae Edwards in Lebanon, Kentucky. The couple shared a wonderful life together and raised six children. Virginia passed away on November 25, 2009. Donald served in the Army National Guard from 1960-64. He was a farmer in Davis County for many years before moving to Columbia in 1988. While in Columbia, he worked as a farmhand and carpenter. He was an outdoorsman who loved catfishing on the Missouri River and going hunting. He is survived by two daughters, Cindy (Jerry) Sherman of Independence, Missouri, Paula Carrier of Kewaunee, Wisconsin; four sons, Michael (Sue) Carrier of Newtown, Missouri, Jeff (Beth) Carrier of Elizabethtown, Kentucky, Rodney (Cheryl) Carrier of Columbia, Missouri, Kevin Carrier of New Bloomfield, Missouri; 17 grandchildren; 18 great-grandchildren; two sisters, Sheralyn Shockley of Clever, Missouri, Leatha Hill of Ottumwa, Iowa; brother-in-law, Bobby (Emmy) Edwards of Campbellsville, Kentucky; sister-in-law, Annette Mattingly of Louisville, Kentucky; and several nieces and nephews. He was preceded in death by his parents; wife; and three granddaughters, Chelsea Carrier, Lindsay Carrier, Tiffany Carrier. Funeral services will be at 11:00 a.m. on Saturday, April 30, 2022 at the Wagler Funeral Home in Bloomfield with Pastor Thom Bryant officiating. Burial will be at the IOOF Cemetery in Bloomfield. Visitation with family present to greet friends will be from 10:00 a.m. until the time of the service on Saturday at the funeral home. In lieu of flowers, a memorial may be made to Fabius Cemetery near Lancaster, Missouri in honor of his granddaughters, Chelsea and Lindsay Carrier.

Donald D. Carrier, 85, of Columbia, Missouri and former resident of Davis County, Iowa passed away on April 23, 2022 at the Boone Hospital Center in Columbia. He was born on April 8, 1937 in Appleton City, Missouri to Willis Linwood and Freda... View Obituary & Service Information

The family of Donald Carrier created this Life Tributes page to make it easy to share your memories.

Send flowers to the Carrier family.