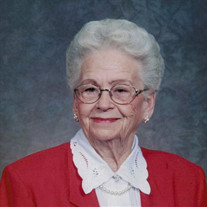 Dorine Bolick, 98, of Bloomfield, Iowa passed away May 3, 2015 at the Bloomfield Care Center. She was born July 14, 1916 in Downing, Missouri to Frank Ford and Catherine Veronica Westhoff Bennett. She married Clark Elmer Bolick January 24, 1937 in Bloomfield. He preceded her in death May 18, 1984. She was a Homemaker, clerk at the Moderne Shop, and worked for the Green Thumb Program with Sieda until retirement at age 83. She is survived by two daughters, Veronica (Bob) Weaklen, Susan (John) Howard both of Bloomfield; four grandchildren, Michael (Sherri) Guiter of Bloomfield, Shawn (Marcy) Howard of Clarinda, Iowa, Seth (Faye) Howard of Pella, Iowa, Stephanie (Ryan) Brown of Coatsville, Missouri; ten great-grandchildren, Camile and Clay Guiter, Storm, Crew, and Sage Howard, Jack, Ryan, and Nate Howard, Laine and Huck Brown; and many nieces and nephews. She was preceded in death by her parents; husband; grandson, Charles Guiter; three brothers, Jim, Harry, and Lester Bennett; and three sisters, Susie Jones, Annie Jones, and Grace Newland. Funeral services will be at 10:30 a.m. on Wednesday, May 6, 2015 at the Wagler Funeral Home in Bloomfield with Pastor Sonny Smyser officiating. Burial will be at the IOOF Cemetery in Bloomfield. Visitation will begin at 9:00 a.m. on Tuesday with the family present to greet friends from 5-7:00 p.m. at the funeral home. Memorials have been established to the Sacred Heart Cemetery Association and the Bloomfield Care Center Activity Fund.

The family of Dorine Bolick created this Life Tributes page to make it easy to share your memories.

Send flowers to the Bolick family.