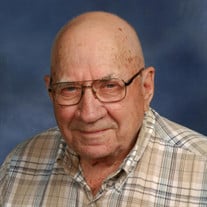 Edward Dean “E.D.” Dixon, 92, of Vinton, Iowa and former resident of Bloomfield, Iowa passed away on November 2, 2021 at his home in Vinton. He was born on June 18, 1929 in Davis County, Iowa to Lowell and Wilma B. McMains Dixon. He spent most of his childhood in Davis County and graduated from Bloomfield High School in 1947. After working for John Deere in Waterloo for a year, he joined the Air Force and was stationed in England during the Korean War. On February 13, 1954 he married Shirley Savage in Mississippi. The couple moved to Davis County shortly after getting married and E.D. farmed and worked for Clouse Appliance located just off the Bloomfield Square. He worked for Clouse Appliance for several years and then took a job with Citizens Mutual, where he worked for many years before his retirement in 1992. While living in the Bloomfield area, E.D. and Shirley were members of the Mark Baptist Church and later the Tabernacle Baptist Church. E.D. and Shirley later divorced. In 1996, E.D. moved to Vinton, Iowa. He became known for driving his yellow scooter around town, making fantastic chocolate chip cookies, and being a part of a caring neighborhood. He enjoyed the company of his neighbor, Dick, and his daughter, Peggy, as-well-as his visits with neighbor, Kandy, and her daughters. He also enjoyed the company of two local blind men that he drove to McDonald’s twice a week for breakfast. E.D. picked up a part-time retirement job at the city compost in 2005 and worked there for 14 seasons. He was a member of the First Baptist Church in Vinton. He is survived by his daughter, Mary (Gerald) Offill of Vinton, Iowa; son, Don Dixon of Miles, Iowa; two grandchildren, Lana (Dustin) Robison of Atkins, Iowa, Lydia (Alan) Tichy of Cedar Rapids, Iowa; five great-grandchildren, Gage, Greta, Cole, Layla, Brooks; and several nieces and nephews. He was preceded in death by his parents; Shirley; and a brother, James “J.W.” Dixon. Funeral services will be at 11:00 a.m. on Monday, November 8, 2021 at the Wagler Funeral Home in Bloomfield with Pastor Lee Carr officiating. Burial will be at the IOOF Cemetery in Bloomfield. Military rites will be performed by Reed-Whisler Post #78 of the American Legion. Visitation will begin at 9:00 a.m. on Monday with the family present to greet friends from 10:00 a.m. until the time of the service. Memorials have been established to the Tabernacle Baptist Church in Bloomfield and the First Baptist Church in Vinton.

The family of Edward "E.D' Dixon created this Life Tributes page to make it easy to share your memories.

Send flowers to the Dixon family.