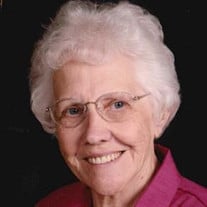 Gladys Elaine Wilcox, 86, of Bloomfield, Iowa passed away July 31, 2016 at the Hospice House in Ottumwa. She was born September 13, 1929 to John H. W. and Gertie Howk Johnson and was raised in southwest Wapello County. Elaine attended Center School and graduated from Ottumwa High School in 1946. She attended Iowa Success School and worked at Ottumwa Mercantile. Elaine later worked at the Davis County Hospital and served as secretary at the Bloomfield Christian Church for 15 years. On August 6, 1950, Elaine married Wendell Wilcox at the Ash Grove Church. The couple would have celebrated their 66th anniversary this week. They spent several years in the Air Force with Elaine returning to Ottumwa while Wendell served in the Korean War. They farmed in Wapello and Davis County for many years before retiring and moving to Bloomfield. Elaine was an avid gardener, quilter, and loved music. She also volunteered at the Hospital Auxiliary, served as a 4-H leader, taught Sunday School and was a member of the Bible Baptist Church in Ottumwa. Her special love was spending time with her grandchildren. She is survived by her husband; four children, Julie (Rodney) Jackson of Somerset, Virginia, Rowene (Alan) White of Bloomfield, Richard Wilcox of Bloomfield, Colleen (Glenn) Reph of Seattle, Washington; nine grandchildren; and 16 great-grandchildren. She was preceded in death by her parents; brother, Alfred Johnson; and a sister-in-law, Charlotte Johnson. Funeral services will be at 10:00 a.m. on Wednesday, August 3, 2016 at the Wagler Funeral Home in Bloomfield with Pastor Ed Mathews officiating. Burial will be at the Drakesville Cemetery in Drakesville, Iowa. Visitation will begin at 9:00 a.m. on Tuesday with the family present to greet friends from 6-8:00 p.m. at the funeral home. Memorials have been established to the Bloomfield Care Center Activity Fund, and the Bible Baptist Church in Ottumwa.

The family of Elaine Wilcox created this Life Tributes page to make it easy to share your memories.

Send flowers to the Wilcox family.