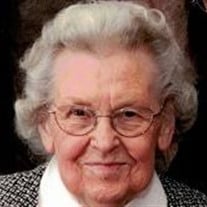 Esther S. Rinkenberger, 96, of Peoria, Illinois and former resident of Bloomfield, Iowa died May 27, 2015 at the Apostolic Christian Skylines Home in Peoria. She was born August 13, 1918 in Strawn, Illinois to William and Mollie Streitmatter Perdelwitz. She married Cleo F. Rinkenberger June 7, 1941 in Princeville, Illinois. Esther worked as a teacher in a K-8 rural school system for several years and then became a homemaker serving her family most of her life on a rural Davis County farm. She loved Jesus and served him in many ways alongside her husband and family. She is survived by two sons, Ronald (Janice) Rinkenberger of Ottumwa, Iowa, Kenneth (Jill) Rinkenberger of Marion, Iowa; five daughters, Nancy (Roger) Musselman of Hopedale, Illinois, Carol (Dale) Strassheim of Hudson, Illinois, Sonia (Mike) Oberman of Mediapolis, Iowa, Janice (Patrick) Bailey of Norway, Iowa, Marsha (Terry) Willhoit of Batavia, Iowa; 26 grandchildren, 58 great-grandchildren; two great-great-grandchildren; and a sister, Florence Tribley of Kerrville, Texas. She was preceded in death by her husband, parents, grandson, Mark Musselman, two brothers, Ralph and LaVern Perdelwitz; and a sister Dorothy Stoller. Funeral services will be at 10:30 a.m. on Saturday, May 30, 2015 at the Bloomfield Apostolic Christian Church in Bloomfield with ministers of the church officiating. Burial will be at the Pulaski Cemetery in Pulaski, Iowa. Visitation will begin at 1:00 p.m. on Friday with the family present to greet friends from 5-7:00 p.m. at the Wagler Funeral Home in Bloomfield. In lieu of flowers, a memorial has been established to the Apostolic Christian Skylines Home, 7023 NE Skyline Dr., Peoria, Illinois, 61614.

Esther S. Rinkenberger, 96, of Peoria, Illinois and former resident of Bloomfield, Iowa died May 27, 2015 at the Apostolic Christian Skylines Home in Peoria. She was born August 13, 1918 in Strawn, Illinois to William and Mollie Streitmatter... View Obituary & Service Information

The family of Esther Rinkenberger created this Life Tributes page to make it easy to share your memories.

Send flowers to the Rinkenberger family.