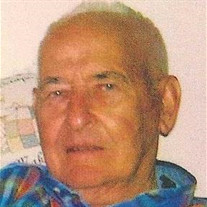 Floyd H. Swaim, 93, of Bloomfield, Iowa passed away December 10, 2017 at the Ottumwa Regional Health Center in Ottumwa. He was born December 28, 1923 in Floris, Iowa to Earl Baker and Edith Rae Blanchard Swaim. He served in the Army during WWII. On July 13, 1946, he married Jane Farris in Bloomfield. The couple were married for 71 years and had two children. Floyd worked for 23 years at John Morrell in Ottumwa and also farmed all his life on the farm he was born on. He was on the Bethlehem Cemetery Board, worked on the Election Board for many years, and was also a township trustee for Salt Creek for many years. He is survived by his wife, Jane Swaim of Bloomfield; two sons, Curtis Joe (Patricia) Swaim, Dennis Lloyd (Penny) Swaim; five grandchildren, Heather (Bill) Morehouse, Aaron (Dianna) Swaim, Tabitha (Adam) Steinbock, Andrew (Katie) Swaim, William Swaim; four great-grandchildren, Gretchen and Ingrid Steinbock, Audrey Swaim, Reed Swaim; and several nieces and nephews. He was preceded in death by his parents; eight brothers, Frank, Doy, John, Harold, Dale, Donald, Ernest Swaim and Gail Swaim; five sisters, Hazil Weiss, Gladys Lanman, Doris Erickson, Mary Swaim, Ruth Casil. Funeral services will be at 11:00 a.m. on Saturday, December 16, 2017 at the Wagler Funeral Home in Bloomfield with Pastor Adam Steinbock and Rev. Aaron Swaim officiating. Burial with military rites performed by Reed-Whisler Post #78 of the American Legion will be at the Bethlehem Cemetery in Davis County. Visitation will begin at 9:00 a.m. on Saturday with the family present to greet friends from 10:00 a.m. until the time of the service. A memorial has been established to the Ronald McDonald House in Des Moines.

Floyd H. Swaim, 93, of Bloomfield, Iowa passed away December 10, 2017 at the Ottumwa Regional Health Center in Ottumwa. He was born December 28, 1923 in Floris, Iowa to Earl Baker and Edith Rae Blanchard Swaim. He served in the Army during... View Obituary & Service Information

The family of Floyd Swaim created this Life Tributes page to make it easy to share your memories.

Send flowers to the Swaim family.