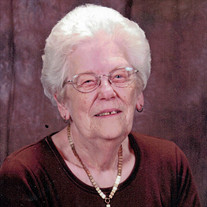 Frances Louise Wallace Hartzler, 94, of Bloomfield, Iowa passed away at the Davis County Hospital on September 20, 2015. She was born on September 18, 1921 south of Pulaski, Iowa to Chester Glenn and Eva J. Lowery Wallace. Her family later relocated to a farm near Moulton, Iowa. She graduated from Moulton High School and later became a one room school teacher. On a chance meeting in Pulaski, Frances met John Hartzler. John later told his friend, “I’ve met the girl I’m going to marry.” They were married in Memphis, Missouri on November 30, 1941. They shared 60 years together before he preceded her in death. Frances was a homemaker and a mother. Her children Daniel W., Betty M. and Barbara L. filled her days. She was active in Mother’s Club, Make-It-Yourself with Wool, Dorcus Circle, 4H and helped on many committees through her child raising years and beyond. In 1978, John and Frances moved to Keosauqua, Iowa where they had many friends and enjoyed spending time golfing. Frances handmade quilts for family members and the Mennonite Auction. Every January for many years, Frances cooked breakfast for the Davis County High School Wrestlers after weigh-in and before they participated in the Van Buren Invitational. She was “grandma” to many kids throughout the years and considered them all her children. They remained in Keosauqua until 1990 when they moved to Bloomfield to enjoy their retirement. Frances spent many hours attending her grandchildren’s sporting and school events. She loved attending the Davis County Fair and never missed the chance to see the kids show their animals. She was preceded in death by her parents; husband; a brother; two sisters; and a daughter, Betty M. Henderson. She is survived by a son, Daniel (Judi) Hartzler of Pulaski, Iowa; a daughter, Barbara Daubenmier of Cedar Rapids, Iowa; 6 grandchildren; 16 great-grandchildren; and a great-great grandchild. She will be greatly missed by the many that loved her. Her body has been cremated. Memorial services will be at 10:30 a.m. on Thursday, September 24, 2015 at Wagler Funeral Home in Bloomfield, Iowa with Pastor Darrell Zook officiating. Burial will be at the Pulaski Cemetery in Pulaski, Iowa. Visitation will begin at 9:00 a.m. on Wednesday with the family present to greet friends from 6-8:00 p.m. at the Wagler Funeral Home in Bloomfield. In lieu of flowers, the Frances L. Hartzler Memorial has been established and will be used in her memory at the Davis County Fair.

The family of Frances Hartzler created this Life Tributes page to make it easy to share your memories.

Send flowers to the Hartzler family.