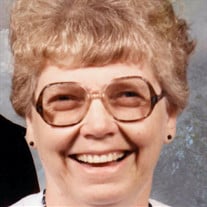 Frances Marie Waller, 81, of rural Bloomfield, Iowa passed away on December 29, 2016 at her home surrounded by family in prayer. She was born May 19, 1935 in Davis County, Iowa to Earl and Edith Harmon Parker. She married Raymond William Waller Jr. on June 19, 1954 in Drakesville, Iowa Raymond passed away on December 24, 1998. Frances was an elementary school teacher in rural schools and later at Wilson Elementary in Ottumwa. She taught for 30 years and touched many lives during her career. In her free time, Frances enjoyed playing cards with her friends, doing crossword puzzles, cooking, fishing, camping, watching game shows, and bird watching. She was a member of Delta Kappa Gamma and wrote two songs for the professional honor society. She will be missed by her family and friends. She is survived by a daughter, Martha Frances Boer of Bloomfield; son, Keith Eugene (Lila) Waller of Bloomfield; nine grandchildren, Steve Boer, Greg Boer, Kris Waller, Kyle Waller, Becky (Mike) Perdew, Matt (Kirstie Davidson) Waller, Justin Garman, Miranda (C.J.) Blakley, Austin (Kelsha Spurgeon) White; six great-grandchildren; and a life-long friend, Lonita Anderson. She was preceded in death by her parents; husband; son, Kenneth Waller; and brother, Ernest Parker. Funeral services will be at 10:30 a.m. on Monday, January 2, 2017 at the Wagler Funeral Home in Bloomfield with Pastor Randy Schmitz officiating. Cremation will follow the service and burial of the cremated remains will be at the Kingdom Cemetery in Davis County at a later date. Visitation will begin at 9:00 a.m. on Sunday with the family present to greet friends from 3-5:00 p.m. at the funeral home. A memorial has been established to the Sherman Chapel Church in Davis County.

Frances Marie Waller, 81, of rural Bloomfield, Iowa passed away on December 29, 2016 at her home surrounded by family in prayer. She was born May 19, 1935 in Davis County, Iowa to Earl and Edith Harmon Parker. She married Raymond William Waller... View Obituary & Service Information

The family of Frances Waller created this Life Tributes page to make it easy to share your memories.

Send flowers to the Waller family.