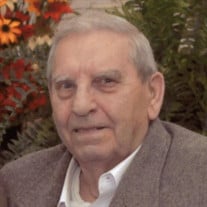 Frederick Stephen Etchison, 86, of Bloomfield, Iowa passed away on March 11, 2022 at the Bloomfield Care Center. He was born on January 26, 1936 in Liberty, Missouri to John H. and Cora Estelle Mallad Etchison. They later divorced and Fred moved to Moulton, Iowa with his father and was raised by a great aunt and uncle, Margaret and Charles Stansberry. Fred married Gloria Squires on April 26, 1958 at the Moulton Christian Church. Fred was a hard worker and always had a job. He worked many places including; Woods' Store in Moulton; painted for the railroad; Maytag; Owens Corning in Kansas City; working on International Harvester tractors after learning how to at school; and the Bloomfield Foundry. After Fred retired, he drove a truck for Golden Furrow and that was his favorite job he ever had. Fred enjoyed working on tractors and built a pulling tractor. He also liked old cars and spending time with his family. He accepted Jesus Christ into his heart late in life and was a member of the Orleans Church of Christ. He is survived by his wife of almost 64 years, Gloria Etchison of Bloomfield; three children, Sherry Etchison of Bloomfield, Stephen (Lorry) Etchison of Bloomfield, Julie (Jack Jones) Etchison of Ottumwa; four grandchildren, William and Lucas Jones, Justice Quiggle, Aaron Hein; three great-grandchildren, Courtney, Aimee, Alexis; one great-great-grandson, Kailor; brother, Albert (Brenda) Jacobs of Kansas City, Kansas; and many nieces and nephews. He was preceded in death by his parents; sister, Maydean (Joe) Garrison; two half-brothers, Melvin (Wanda) Etchison, Brownie Jacobs; and two half-sisters, Marie Jacobs Jones, Donna Williams. Fred's wish was to be cremated. A visitation will begin at 3:00 p.m. on Thursday, March 17, 2022 at the Wagler Funeral Home in Bloomfield with the family present to greet friends from 5-7:00 p.m. Burial will be at the Sunset View Cemetery north of Moulton at a later date. A memorial has been established to the Orleans Church of Christ.

Frederick Stephen Etchison, 86, of Bloomfield, Iowa passed away on March 11, 2022 at the Bloomfield Care Center. He was born on January 26, 1936 in Liberty, Missouri to John H. and Cora Estelle Mallad Etchison. They later divorced and Fred... View Obituary & Service Information

The family of Fred Etchison created this Life Tributes page to make it easy to share your memories.

Send flowers to the Etchison family.