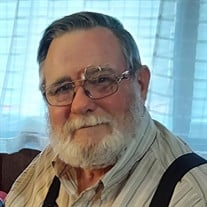 Gary Alan Fields was born to Donald and Helen Waterman Fields on July 31, 1953 in Marysville, Ohio. He peacefully passed away on December 15, 2021 in Kirksville, Missouri at the age of 68. His childhood years were spent in Ohio. He graduated from North Union High in Richwood in 1971. During a difficult time in his early twenties, he was introduced to Christ and he yielded his life to Him at that time. He met me, Kathy Richard, at God’s Bible College in Cincinnati and we married on April 1, 1978. Shortly after our marriage we moved out west. God blessed our home with three children. We children grew up knowing dad as an appliance repairman. He worked at that for 25 years and then due to a back injury he started tinkering with clock and watch repair. He had many hobbies and other interests such as gold panning and exploring anything old, like cemeteries, homesteads, abandoned mines, trails, or back roads leading to anywhere. Dad taught us to love the Lord and was always concerned about our spiritual well being. He left us with a Godly legacy that we desire to pass on to our children. We look forward to meeting him in heaven someday. Through God’s leading we moved to North Eastern Missouri where he started attending the Church of God in Christ Mennonite at Bloomfield, Iowa. He recommitted his life to the Lord and upon the confession of his faith was baptized on March 30, 2014. He faithfully endeavored to keep his vows, remaining victorious to the end. His church brothers and sisters became very dear to him. One of his great joys was the tract work and meeting people. Those left to cherish precious memories are his wife, Kathy; three children, Beth and husband Brian Hendricks of Kirksville, Missouri, Matthew and wife Hannah Fields of Cheyenne, Wyoming, Steve and wife Mae Fields of Yaak, Montana; mother, Helen Fields of Greentop, Missouri; grandchildren, Emily, Anna, Daniel, Elouise, Abe, Dally, and Sara Mae Hendricks, Amber, Jacob, Rebekah, Lydia, and Rachel Fields, Gideon, Ziva, and Owen Fields; two sisters, Lynn and husband Jay Landon, Sheila and husband Matt Kennedy; brother, David and wife Stephanie Fields; and sister-in-law, Lisa Fields. He was preceded in death by his father, Donald and a brother, Brian. Funeral services will be at 10:30 a.m. on Tuesday, December 21, 2021 at the Bloomfield Mennonite Church in Bloomfield with Pastors Daryl Toews and Weldon Becker officiating. Burial will be at the Bloomfield Mennonite Church Cemetery. Visitation will be from 6-8:00 p.m. on Monday at the Bloomfield Mennonite Church. A memorial has been established to his family.

Gary Alan Fields was born to Donald and Helen Waterman Fields on July 31, 1953 in Marysville, Ohio. He peacefully passed away on December 15, 2021 in Kirksville, Missouri at the age of 68. His childhood years were spent in Ohio. He graduated... View Obituary & Service Information

The family of Gary Fields created this Life Tributes page to make it easy to share your memories.

Send flowers to the Fields family.