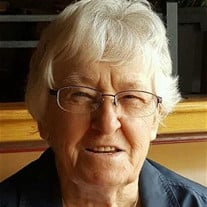 Georgia Ann Wells, 85, of Ottumwa, Iowa and former resident of Pulaski, Iowa passed away with her family by her side on August 25, 2017 at the Vista Woods Care Center in Ottumwa. She was born on October 14, 1931 in Pulaski, Iowa to Samuel S. and Ocie E. Burnaugh Stevig. Georgia graduated from Pulaski High School in 1949 and married the love of her life, Joe Dean Wells, a few years later on January 7, 1951. The couple raised four children on a farm near Pulaski and lived there until retiring and moving to Ottumwa in 2003. Joe passed away on November 22, 2009. Georgia loved being outdoors and working on the farm. She participated in every aspect of the farm whether it be driving a tractor, mowing the lawn, herding livestock, or tending to a garden where she grew vegetables and flowers. She became a Master Gardner and excelled at growing Gladiolus flowers. Georgia was also excellent in the kitchen with her specialty being cinnamon rolls or lime pickles that she would share with her family and friends. While living in Pulaski she was a member of the Tri-R Club and served on the Davis County Extension Council for many years. After moving to Ottumwa, Georgia kept busy by making new friends, playing pitch, doing crossword puzzles, and jigsaw puzzles. The many jigsaw puzzles her and her friends completed were sold with the money going for humanitarian purposes. Georgia touched a lot of lives and she will be deeply missed by her family and friends. She is survived by four children, Dennis and Tony of Las Vegas, Nevada, Sharon Moritz of Northwood, Iowa, Don and Sue of Nevada, Iowa, Daryl and Rahni of Chicago, Illinois; four grandchildren, Alicia Wells, Mason Wells, Karl and Alicia Moritz, Clayton Moritz; great-granddaughter, Kallie Moritz, the newest love of her life; and several nieces and nephews. She was preceded in death by her parents; husband; three sisters, Viola Sporer, Marjorie Trachsel, Rebecca Sinkey; and two brothers, John and Lloyd Stevig. Funeral services will be at 2:00 p.m. on Sunday, September 3, 2017 at the Wagler Funeral Home in Bloomfield with Rev. Jack Knox officiating. Burial will be at the Pulaski Cemetery. Visitation with family present to greet friends will be from 4-6:00 p.m. on Saturday at the funeral home. A memorial has been established to the Leukemia and Lymphoma Society.

Georgia Ann Wells, 85, of Ottumwa, Iowa and former resident of Pulaski, Iowa passed away with her family by her side on August 25, 2017 at the Vista Woods Care Center in Ottumwa. She was born on October 14, 1931 in Pulaski, Iowa to Samuel S.... View Obituary & Service Information

The family of Georgia Wells created this Life Tributes page to make it easy to share your memories.

Georgia Ann Wells, 85, of Ottumwa, Iowa and former resident of...

Send flowers to the Wells family.