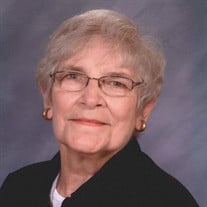 Glenna Lou Cook Dabney, 88, of Bloomfield, Iowa passed away on November 5, 2020, at the Bloomfield Care Center. She was born January 16, 1932, in Fremont, Iowa. Beloved as a daughter, wife, sister, mother, and grandmother, she married Ronald Wayne “Rock” Dabney on September 7, 1957, at the Fremont United Methodist Church. She was a 1949 graduate of Fremont High School and attended Iowa Success Business School in Ottumwa and was a member of the Theta Alpha Chi Sorority and Beta Sigma Phi Sorority. An accomplished basketball player in high school, she was recruited by Iowa Success to play on its team, which achieved noteworthy success against local teams including colleges in the state and in the National AAU Tournament. She also played in teams for Oskaloosa Sportettes and the John Morrell team. Glenna served as deputy clerk of District Court of Davis County and as Clerk of District Court for 17 years before retiring in 1995. She was a member of the Bloomfield United Methodist Church having served in various capacities. She has been an active member of United Methodist Women, having served on the Executive Board and as Circle Chairman. She was also active in PTA, Mother’s Lab, American Legion Auxiliary, Scouts, Faculty Wives’ and various school activities. Glenna served as president of Business and Professional Women and was a member of the Davis County Hospital Auxiliary, Historical Society, Fine Arts Council, and Bloomfield Country Club. She was a past member of the Iowa Clerk’s Association and the Democrat Central Committee. She was also a member of the Red Hat Mamas, a red hat society. She is survived by two sons, Kirk (Melinda) Dabney of Urbandale, Iowa, Mike (Sheila) Dabney of Centerville, Iowa; four grandchildren, Logan Dabney, Danae Dabney, Blake Dabney, Drew Dabney; brother, Tony (Shirley) Cook of Bloomington, Minnesota; two sisters, Linda (Ray) Horbal of Rogers, Minnesota, Dixie Andrews of Waukee, Iowa; and several special nieces and nephews. She was preceded in death by her parents, Ronald and Fairy Cook; and husband, Ronald Dabney who passed away on October 1, 2004. Funeral services will be at 10:30 a.m. on Tuesday, November 10, 2020 at the Wagler Funeral Home in Bloomfield, please wear a mask if attending. If unable to attend, the funeral will be live streamed on the Wagler Funeral Home Facebook page. Burial will be at the IOOF Cemetery in Bloomfield. Open visitation without the presence of family will be from noon to 6:00 p.m. on Monday at the funeral home. Memorials have been established to EveryStep Hospice and the Bloomfield United Methodist Church.

Glenna Lou Cook Dabney, 88, of Bloomfield, Iowa passed away on November 5, 2020, at the Bloomfield Care Center. She was born January 16, 1932, in Fremont, Iowa. Beloved as a daughter, wife, sister, mother, and grandmother, she married Ronald... View Obituary & Service Information

The family of Glenna Dabney created this Life Tributes page to make it easy to share your memories.

Glenna Lou Cook Dabney, 88, of Bloomfield, Iowa passed away on...

Send flowers to the Dabney family.