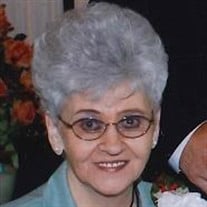 Gloria LaVern Kelly Smith, 90, of Milton, Iowa entered her eternal home on February 2, 2017. She was born November 25, 1926 in Carthage, Illinois to Merrill and Mabel Bryant Porter. She married John Kelly on May 13, 1951 in Plymouth, Illinois. To this union four children were born; Richard, Connie, Robin, and David. The couple were later divorced. In October of 2001 she married Don Smith. Don passed away in June of 2007. Gloria’s joy in life was her love for Jesus and her family. She was blessed with a musical gift of playing the piano and she used that gift in ministry by playing Christian songs with “The Kelly Family.” She will be remembered as a “people-person.” She loved her family unconditionally and had many friends. Her greatest prayer in life was that her children, grandchildren, and great-grandchildren would know Jesus as their Lord and Savior. She is survived by four children, Richard (Sandy) Kelly of Cantril, Iowa, Connie (David) Heiser of Pulaski, Iowa, Robin (Calvin) Bartholomew of Milton, Iowa, David (Dianne) Kelly of Sigourney, Iowa; four grandchildren, Justin (Heather) Chaplin of Cantril, Andrea (Michael) Bailey of Pulaski, Kelli (Josh) Husted of Ottumwa, Iowa, Brandon (Tasha) Kelly of Fremont, Iowa; eight great-grandchildren, Kailey and Kelsey Chaplin, Garrett and Griffin Bailey, Halle and Grant Husted, Bryton and Payten Kelly; sister, Joanne Spory of Paola, Kansas; three step-children and their families; and several nieces and nephews. She was preceded in death by her parents; husband; two brothers, and three sisters. Funeral services will be at 10:30 a.m. on Monday, February 6, 2017 at the Wagler Funeral Home in Bloomfield with Pastor Jerry Caughron officiating. Burial will be at the Pulaski Cemetery in Pulaski, Iowa. Visitation will begin at 9:00 a.m. on Sunday with the family present to greet friends from 2-4:00 p.m. at the funeral home. A memorial has been established to her family.

Gloria LaVern Kelly Smith, 90, of Milton, Iowa entered her eternal home on February 2, 2017. She was born November 25, 1926 in Carthage, Illinois to Merrill and Mabel Bryant Porter. She married John Kelly on May 13, 1951 in Plymouth, Illinois.... View Obituary & Service Information

The family of Gloria Kelly Smith created this Life Tributes page to make it easy to share your memories.