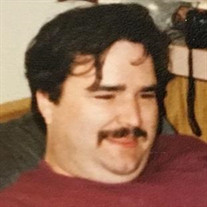 Gregory Royce Brown, 57, of rural Bloomfield, Iowa passed away on April 10, 2019 at the University of Iowa Hospital Hospitals and Clinics due to complications of influenza. He was born January 23, 1962 in Ottumwa, Iowa to C. William Brown and C. Elizabeth (Brown) Brown. He graduated from Davis County High School in 1980 and received his bachelor's degree from Iowa State University in 1987 in Hotel, Restaurant, and Institutional Management. Greg worked for several years as a bus maintenance mechanic for CyRide City Buses in Ames, Iowa. He later earned an Associate Degree in Electronics from Indian Hills Community College. He is survived by two sisters, Evelyn Stoneman of Viroqua, Wisconsin, Marilyn (Bruce Long) Brown, of Bloomfield, Iowa; brother, Charles (Pearl) Brown, Jr., of Bowling Green, Missouri; and a niece, M. Lorrinda (James) Stoneman Waege of Tomah, Wisconsin. He is preceded in death by his parents; infant sister, Judith; fiancée Linda Owings; and brother-in-law, Loren Stoneman. Greg enjoyed going to antique shows and flea markets and meeting with his special group of friends at McDonald's in Ottumwa. He liked to travel. Other hobbies included engraving, studying topics such as astronomy and foreign languages, working on cars, and listening to Lawrence Welk and The Gaithers. Funeral services will be at 11:00 a.m. on Thursday, April 18, 2019 at the Wagler Funeral Home in Bloomfield with Pastor Tim Frasher officiating. Burial will be at the IOOF Cemetery in Bloomfield. Visitation will begin at 9:00 a.m. on Thursday with the family present to greet friends from 10:00 a.m. until the time of the service. A memorial has been established to the family to be designated at a later date. Online condolences may be directed to www.waglerfuneralhome.com.

Gregory Royce Brown, 57, of rural Bloomfield, Iowa passed away on April 10, 2019 at the University of Iowa Hospital Hospitals and Clinics due to complications of influenza. He was born January 23, 1962 in Ottumwa, Iowa to C. William Brown and... View Obituary & Service Information

The family of Gregory Brown created this Life Tributes page to make it easy to share your memories.

Send flowers to the Brown family.