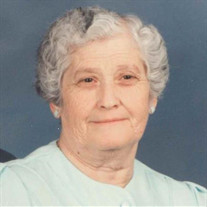 Hazel Marie Stogdill Shively, 84, of Bloomfield, Iowa passed away May 6, 2016 at her home. She was born September 23, 1931 in Davis County, Iowa to Francis Marion and Martha Jane Bowman Stogdill. She married Ronnie Lewis Shively on March 25, 1952 in Hannibal, Missouri. He preceded her in death on October 29, 1991. Hazel and her husband operated the Shively Dairy Farm and she remained active on the farm until she was 70 years old. She was a member of the Mark Baptist Church and loved to read her Bible. In her free-time she enjoyed doing word search puzzles, gardening, planting flowers, and playing the piano. Hazel loved spending time with her family, especially her grandchildren and great-grandchildren who she referred to each one as “Sweety.” She is survived by four children, Rhonda Shively of Bloomfield, Mark (Vicki) Shively of Bloomfield, Julie (Jon) Rice of Council Bluffs, Iowa, Sheila (Gary) Rudd of Bloomfield; eight grandchildren, Misti (Stu) Picton, Justin (Brandy) Shively, Jill (Dave) Sakalosky, Jon Rice III, Jason (Kellie) Rice, Maddison (Javier Ixba) Rudd, Stephen Rudd, Ethan Rudd; 14 great-grandchildren; and a brother, Verlin Stogdill of Flint, Michigan. She was preceded in death by her parents; husband; granddaughter, Mindi Shively; five sisters, Alta Graves, Helen Smothers, Opal York, Alvina Middleton, Eula Parson; and two infant brothers. Funeral services will be at 10:00 a.m. on Wednesday, May 11, 2016 at the Mark Baptist Church in Davis County. Pastor Gary Axtell will be officiating. Burial will be at the Coatesville Cemetery in Coatesville, Missouri. Visitation will begin at 2:00 p.m. on Tuesday with the family present to greet friends from 5-7:00 p.m. at the Wagler Funeral Home in Bloomfield. Memorials have been established to Hospice of Wapello and Davis Counties and the Mark Baptist Church.

Hazel Marie Stogdill Shively, 84, of Bloomfield, Iowa passed away May 6, 2016 at her home. She was born September 23, 1931 in Davis County, Iowa to Francis Marion and Martha Jane Bowman Stogdill. She married Ronnie Lewis Shively on March 25,... View Obituary & Service Information

The family of Hazel Stogdill Shively created this Life Tributes page to make it easy to share your memories.

Send flowers to the Shively family.