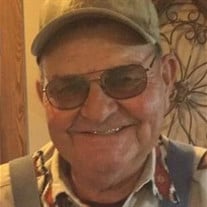 Jackie Wray “Jack” Henderson, 75, of Drakesville, Iowa passed away on March 11, 2019 at the Bloomfield Care Center. He was born June 28, 1943 in Drakesville, Iowa to Vern King and Glennis Mareta Forsythe Henderson. He married Betty Hartzler on June 20, 1964. She preceded him in death on March 25, 1989. On July 20, 1991, he married Sally VerPloeg Critchlow. Jack worked for John Deere in Ottumwa for 30 years, retiring in 1997. He was also a farmer, raising crops and various livestock over the years. He was a member of the Bloomfield Christian Church, Davis County Sheep Producers, Citizens Mutual Telephone Board from 2002-2014, and the Farm Service County Committee Board. He enjoyed being on the farm and driving around on his gator, going to the Iowa State Fair, watching his grandchildren show animals, and spending time with family. He is survived by his wife, Sally Henderson; two sons, David (Becky) Henderson, Mark (Jenny Davis) Henderson both of Drakesville; two step-sons, Rex (Alice) Critchlow of Oskaloosa, Iowa, Rick Critchlow of Unionville, Iowa; five grandchildren, Tyler (Shayna) Henderson, Madison (Cole) Rushing, Tucker (Alexis) Henderson, Dylan Henderson, Walker Henderson; four step-grandchildren, Colt Davis, Robin Critchlow, Brittany (Nick) Houser, Kale Critchlow; great-grandchildren, Joslyn and Preslee Henderson, Ava Henderson, and two more on the way; sister, Carol Sue (Glen) Howard of Moulton, Iowa; brothers-in-law, Paul Hopkins of Ottumwa, Dan (Judi) Hartzler of Pulaski, Iowa; sister-in-law, Barb Hartzler Daubenmier of Cedar Rapids, Iowa; and several nieces and nephews. He was preceded in death by his parents; first wife, Betty; and a sister, Carolyn Hopkins. Funeral services will be at 10:00 a.m. on Friday, March 15, 2019 at the Wagler Funeral Home in Bloomfield with Pastor Ron DeVore officiating. Burial will be at the Drakesville Cemetery. Visitation will begin at noon on Thursday with the family present to greet friends from 5-7:00 p.m. at the funeral home. In lieu of flowers, a memorial has been established to his family to be designated at a later date. Online condolences may be directed to www.waglerfuneralhome.com.

The family of Jack Henderson created this Life Tributes page to make it easy to share your memories.

Send flowers to the Henderson family.