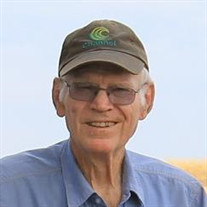 Jackie Neil White, 78, of rural Bloomfield, Iowa passed away on December 4, 2017 at the University of Iowa Hospitals and Clinics in Iowa City. He was born June 21, 1939 in Davis County, Iowa to Fred Amos and Augie Hildred Brunk White Jr. He graduated from Troy High School in 1956. On December 29, 1962, he married Shirley Stone in Pulaski, Iowa. The couple raised three children and enjoyed 55 years with each other. Jack was a farmer, raising crops and livestock including cows, pigs, and the occasional sheep. He loved farming and the sense of community it gave him with other local farmers, often times spending hours talking with friends over coffee at the Troy Elevator. While not working, he enjoyed watching old western movies and television shows, rooting on the Iowa Hawkeyes, and dancing with his wife in his younger years. Above all else, Jack was a family man. He loved spending time with his wife, children, grandchildren, and great-grandchildren going to sporting events, beauty pageants, and whatever else the grandchildren were involved in. Those times were important to him and he didn’t miss many over the years. Jack was a role model for the younger generations of his family. He instilled the importance of family, hard work, enjoyment of life through a good sense of humor that he never lost, and community. He will be greatly missed by his family and friends. He is survived by his wife, Shirley White; son, Jeff (Loresa) White of Bloomfield; two daughters, Lisa (Cal) Evans of Ottumwa, Iowa, Missy (Troy) Bullock of Elkhart, Iowa; six grandchildren, Crystal Irey, Cassie White, Tyler, P.J. and Shad Evans, Morgyn Bullock; 15 great-grandchildren; two brothers, Joe (Marilyn) White, Donnie White both of Troy; sister, Judy (Bob) Heidenreich of Columbia, Missouri; brother-in-law, Clair Rodgers; and several nieces, nephews, and cousins. He was preceded in death by his parents; brother and sister-in-law, John and Rita White; sister, Mary Ann Rodgers; and sister-in-law, Alice White. Funeral services will be at 10:30 a.m. on Friday, December 8, 2017 at the Wagler Funeral Home in Bloomfield with Rev. Donna Olinger officiating. Burial will be at the Troy Cemetery. Visitation will begin at 9:00 a.m. on Thursday with the family present to greet friends from 5-7:00 p.m. at the funeral home. In lieu of flowers, memorials have been established to the Look to the Stars Cancer Foundation in Davis County and the University of Iowa Holden Comprehensive Cancer Center in Iowa City.

Jackie Neil White, 78, of rural Bloomfield, Iowa passed away on December 4, 2017 at the University of Iowa Hospitals and Clinics in Iowa City. He was born June 21, 1939 in Davis County, Iowa to Fred Amos and Augie Hildred Brunk White Jr. He... View Obituary & Service Information

The family of Jack White created this Life Tributes page to make it easy to share your memories.

Send flowers to the White family.