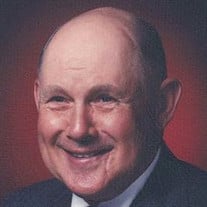 James Meredith Baughman, 85, of Pulaski, Iowa passed away December 3, 2016 at Iowa Methodist Medical Center in Des Moines. He was born April 8, 1931 in Pulaski, Iowa to Harold Christian and Gladys Mae Meredith Baughman. He married Carol Graber on April 19, 1952 in Wayland, Iowa. James served in the I-W Program for two years, working at the Iowa Methodist Medical Center in Des Moines. After moving back to Pulaski, he farmed for a few years with his father and then started “Levelcrest Dozer Service” and ran a bulldozer until he was 81 years old. James was an active member of the Pulaski Mennonite Church, Land Improvement Contractors Association, and was a Board of Trustee for Prairie Township for many years. One of his duties as Trustee was being sexton for the Pulaski Cemetery. In his free time, James enjoyed spending time with his family and reading. He is survived by his wife, Carol Baughman; daughter, Debra (Rick) Forbes of Mt. Vernon, Iowa; son, Jeff Baughman of Lacey, Washington; six grandchildren, Bryan (September) Forbes, Brent (Alysa) Forbes, Bruce Forbes, Zach (Courtney) Baughman, Jake Baughman, Ben Baughman; eight great-grandchildren; two sisters, Mary Ann Fisher, Joy (Steve) Evans both of Bloomfield; two brothers, William (Barbara) Baughman of Pulaski, Glenn (Ann Marie) Baughman of Des Moines; and several nieces and nephews. He was preceded in death by his parents and an infant daughter. Memorial services will be at 10:00 a.m. on Saturday, December 10, 2016 at the Pulaski Mennonite Church with Pastor Darrell Zook officiating. Burial of the cremated remains will be at the Pulaski Cemetery. Visitation will begin at 2:00 p.m. on Friday with the family present to greet friends from 5-7:00 p.m. at the funeral home. Memorials have been established to the Pulaski Mennonite Church and the Friends of the Bloomfield Public Library.

The family of James Baughman created this Life Tributes page to make it easy to share your memories.

Send flowers to the Baughman family.