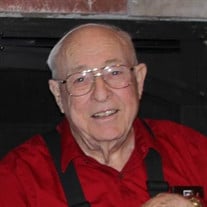 James “Jimmie” Edsel Johnson, 93, of Marshalltown, Iowa and former resident of Davis County, Iowa passed away on September 22, 2019 at the Iowa Veterans Home in Marshalltown. He was born February 23, 1926 in Davis County to Jeremiah Francis and Nellie Faun Badger Johnson. He married Sarah Ilene Starr on August 29, 1945 in Puyallup, Washington. James served for two years in the Army Medical Corp and was stationed in Adak, Alaska at the 179th Station Hospital. James was a farmer, insurance agent, over-the-road truck driver, owned an implement business, and was owner/operator of a ceramic business. He enjoyed spending time with family, especially around the holidays when everyone would get together. He also enjoyed going on many trips with this wife and children. He was a member of Reed-Whisler Post #78 of the American Legion, Independent Order of Foresters, Disabled American Veterans, and the Monterey Christian Church where he served as deacon and elder. Those who knew him best will say that he was always on the go looking for the next adventure, and was always willing to help those he met. He is survived by his wife, Sarah Ilene of Marshalltown; six children, Connie (Larry) Ramseyer of Altoona, Iowa, Debbie (Roger) Bailey of Bloomfield, James (Vindy) Johnson of Bloomfield, Sheri (Ken) Nady of Ankeny, Iowa, Doug (Marilyn) Johnson of Norwalk, Iowa, Tom (Kristin) Johnson of Indianola, Iowa; 13 grandchildren; 17 great-grandchildren; and numerous nieces and nephews. He was preceded in death by his parents; grandson, Adam Bailey; four brothers, Kenneth Johnson, Carl Johnson, Quentin Johnson, Kendall Johnson; and two sisters, Lucille Johnson and Pauline (Bernard) Gravett. Funeral services will be at 10:30 a.m. on Thursday, September 26, 2019 at the Wagler Funeral Home in Bloomfield with Pastor Marvin Martin officiating. Burial will be at the IOOF Cemetery in Bloomfield. Military rites will be performed by Reed-Whisler Post #78 of the American Legion. Visitation will begin at 9:00 a.m. on Thursday with the family present to greet friends from 9:30 a.m. until the time of the service. A memorial has been established to the Avenue of Flags.

James &#8220;Jimmie&#8221; Edsel Johnson, 93, of Marshalltown, Iowa and former resident of Davis County, Iowa passed away on September 22, 2019 at the Iowa Veterans Home in Marshalltown. He was born February 23, 1926 in Davis County to Jeremiah... View Obituary & Service Information

The family of James "Jimmie" Johnson created this Life Tributes page to make it easy to share your memories.

Send flowers to the Johnson family.