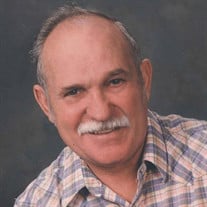 James Phillip “Jim” Stoker, 87, of rural Bloomfield, Iowa passed away on September 25, 2020 at his home with family by his side. He was born March 30, 1933 in Wyoming to William and Dorothy Miskimins Stoker. Jim married Jo Ann Wilcoxson and they later divorced. On December 11, 1987 he married May Masters in Milton, Iowa. He worked and retired from John Deere. Jim and May also worked tirelessly together on their farm raising black angus cattle, crops, and hay. They were inseparable and true best friends. Jim served in the Army and was a member of Reed-Whisler Post #78 of the American Legion in Bloomfield and the VFW. He was proud to have served his country. Jim added strength and happiness to others and he will be greatly missed by his family and friends. He is survived by his wife, May Stoker; seven children, Randy (Theresa) Stoker of Ottumwa, Iowa, Kathy (Elmer) Buick of Las Vegas, Nevada, Sheila (Dennis) Morgan of Redding, California, Doug (Theresa) Stoker of Waterloo, Iowa, Dewey (Carol) Coatney of Troy, Iowa, Julie (Joe) Longcor of Searsboro, Iowa, Kristine (David) Maynard of Niota, Illinois; many grandchildren; several great-grandchildren; three sisters, Ruth Ann Sumner of Montana, Susan (Gerald) Brunk of Memphis, Missouri, Betty (Richard) Ross of Galesburg, Illinois; and special friends and neighbors, Harry and Brenda Howk and family. He was preceded in death by his parents; granddaughter, Krystal Doud; brother, William Stoker; and three sisters, Ada Petefish, Gretchen Hillard, and Cynthia Stoker. Jim’s wish was to be cremated and scattering of his cremated remains will be held at a later date. No services are planned.

The family of James "Jim" Stoker created this Life Tributes page to make it easy to share your memories.

Send flowers to the Stoker family.