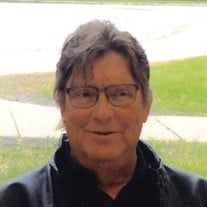 Jeffrie Roland Anderson, 69, of Bloomfield, Iowa passed away on June 13, 2022 at the University of Iowa Hospitals and Clinics in Iowa City. He was born on September 18, 1952 in Sioux Falls, South Dakota to Glenn V. and Verna O. Brosz Anderson. He graduated from Mason City High School in 1971. On September 4, 1987 he married Beth Schimmelpfennig at Lake Keomah, Iowa. Jeffrie had a passion for cars and music; his career mimicked that passion. He worked for Price Motors in Mason City as parts manager then in 1977, he moved to Ottumwa, Iowa to manage a local disco, "The Jailhouse." He then ran sound and lights for the band, Atlantis, until he started work at Harris Motor Company as parts manager. He then worked at Bloomfield Ford as service manager. After Bloomfield Ford closed, he went to truck driving school and worked for Flynn Construction out of Dubuque, Iowa where he helped build the four-lane highway around Fairfield, Iowa. Jeffrie then worked as a truck driver for Troy Elevator and ran the sound and lights for the band, Standing Hampton. Jeffrie has also served on the Bloomfield City Council for twelve years. While not working, Jeffrie loved to spend time with his family and friends. He became very good at fishing and would enter several fishing tournaments over the years. Jeff also liked camping, riding motorcycles, listening to music, and playing with his two dogs, Rocky and Cuddles. Jeffrie adored his wife, Beth, and they loved spending time with their grandchildren and great-grandchildren. He will be greatly missed by his family and friends. He is survived by his wife; son, Kirby (Dawn) Knudtson of Manly, Iowa; three granddaughters, Paige (Cory) Marsh of Northwood, Iowa, Raevyn Knudtson of Northwood, Khyia Knudtson of Manly; two great-grandchildren, Briggs and Remi Marsh; brother, Mike (Linda) Anderson of Marshalltown, Iowa; and several nieces, nephews, and godchildren. He was preceded in death by his parents and granddaughter, TJ Knudtson. Memorial services will be at 11:00 a.m. on Saturday, June 18, 2022 at the Wagler Funeral Home in Bloomfield with Pastor Matt Froah officiating. Visitation will begin at 2:00 p.m. on Friday with the family present to greet friends from 5-7:00 p.m. at the funeral home. A memorial has been established to his family to be designated at a later date.

Jeffrie Roland Anderson, 69, of Bloomfield, Iowa passed away on June 13, 2022 at the University of Iowa Hospitals and Clinics in Iowa City. He was born on September 18, 1952 in Sioux Falls, South Dakota to Glenn V. and Verna O. Brosz Anderson.... View Obituary & Service Information

The family of Jeffrie Anderson created this Life Tributes page to make it easy to share your memories.

Send flowers to the Anderson family.