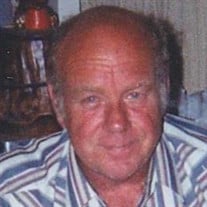 Jerry Keith Miller, 77, of Kirksville, Missouri passed away on August 1, 2020 at Good Samaritan Society – Ottumwa. He was born March 20, 1943 in Kirksville, Missouri to Leroy and Carrie Adelene Lourance Miller. He graduated from Kirksville High School and joined the Navy. He married Kazuko Yamazaki in Japan. Jerry spent 20 years in the Navy and after retirement worked for Kmart and as a handyman. In his free time, he enjoyed woodworking, fishing, hunting, listening to country music, gardening, working jigsaw puzzles, watching football, and rooting on the St. Louis Cardinals. He is survived by his wife, Kazuko Miller of Kirksville, Missouri; two sons, Jon (Brenda Turner) Deshatler of Packwood, Iowa, Keith Miller (from a previous marriage); four grandchildren, Nathan Bearden of Floris, Iowa, Jeremiah Deshatler of Ottumwa, Iowa, Sabrina (Shay) Harnden of Ottumwa, Iowa, Alex Deshatler of Ottumwa, Iowa; and three great-grandchildren. He was preceded in death by his parents and three great-grandchildren, Birttany, Luke, and Cecila. Jerry’s wish was to be cremated and burial will be at the Missouri Veterans Cemetery in Jacksonville, Missouri at a later date. Wagler Funeral Home in Bloomfield, Iowa is assisting the family and online condolences may be directed to www.waglerfuneralhome.com.

The family of Jerry Miller created this Life Tributes page to make it easy to share your memories.

Jerry Keith Miller, 77, of Kirksville, Missouri passed away on...

Send flowers to the Miller family.