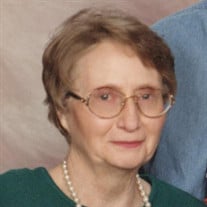 Joan Lenora Van Horn, 89, of Columbus, Nebraska, and former resident of Bloomfield, Iowa passed away on July 21, 2020, at Emerald Rehab and Nursing in Columbus. She was born May 15, 1931 in rural Davis County, Iowa, to Loren K. and Freedom Bogle Porter. She graduated from Bloomfield High School in 1949. On November 26, 1950 she married Carl Van Horn in Bloomfield. In 1957, the couple moved to Denver, Colorado and spent 13 years living there before moving to Gering, Nebraska, where they lived for 25 years. Along the way they had two children, Julie and Dean. In retirement, they moved back to Bloomfield and Joan became Carl’s caretaker for the last 14 years of his life before he passed away on May 7, 2014. Joan was a secretary for the government and several businesses, ending her work career with the Foster Grandparent program as the secretary and then Director of the program. These were the best years of her career. She not only enjoyed the children that the program helped, but also the grandparents that volunteered to be a part of the program. While not working, Joan enjoyed traveling with Carl and was especially fond of a trip to Montana they took to learn more about their family history as it was very important to her. She was an avid journalist and collected antiques. Joan was also active with the Christian Churches in the towns she and Carl lived in over the years. She will be deeply missed by those who knew her. She is survived by her daughter, Julie (David) Boening of Lakewood, Colorado; son, Dean (Ruth) Van Horn of Columbus, Nebraska; grandson, Phillip (Jamie) Van Horn of Wichita, Kansas; great-granddaughter, Charlie June Van Horn; and several nieces and nephews. She was preceded in death by her parents; husband; sister, Joyce Scott; and brother-in-law, Clifford Scott. Graveside services will be at 11:00 a.m. on Monday, July 27, 2020, at the IOOF Cemetery in Bloomfield with Rev. Leslie Dotson officiating. No visitation is planned. A memorial has been established to the Bloomfield Christian Church.

Joan Lenora Van Horn, 89, of Columbus, Nebraska, and former resident of Bloomfield, Iowa passed away on July 21, 2020, at Emerald Rehab and Nursing in Columbus. She was born May 15, 1931 in rural Davis County, Iowa, to Loren K. and Freedom... View Obituary & Service Information

The family of Joan Van Horn created this Life Tributes page to make it easy to share your memories.