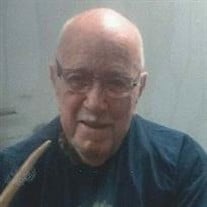 Joseph “Joe” Frank Rossi, 88, of Ottumwa, Iowa passed away on January 17, 2019 at Good Samaritan Society – Ottumwa. He was born February 14, 1930 in San Jose, California to Ernest and Teresa Meynier Rossi. He married Geraldine “Gerry” Bickel Enlow on October 5, 1990. She passed away on April 10, 2014. Joe grew up in California and after high school worked as a deputy sheriff in Santa Clara County and as a correctional officer at San Quentin State Prison. He would go on to work several jobs in his life but he was the proudest of owning Rossi Gun Shop with his wife, Gerry. While not working, Joe enjoyed collecting things and this hobby took him to many garage sales and flea markets over the years. He was a people person and loved to talk and tell stories. Many of these conversations would happen at his favorite restaurant in the area, Country Kitchen. Joe also liked to hunt and continued to do so very late in life. Last September he shot an 8-point-buck and gained another story to tell. He was very proud of that hunt and truly grateful for the Des Moines River Valley Chapter of Serve Outdoors for taking him. He will be greatly missed by his family and friends. He is survived by a daughter, Jennifer L. Rossi of Trigard, Oregon; son, Joseph Allan (Kim) Rossi of Santa Rosa, California; six step-children, Linda (Bruce) Troxel of Ottumwa, Richard Enlow of Texas, Barbara (Mike) Hird of Belknap, Iowa; Judy (Donald) Chickering of Drakesville, Iowa, Tracy (Owen) Lackey of Union Grove, Wisconsin, Chuck (Nicole) Enlow of Blakesburg, Iowa; three grandchildren; 20 step-grandchildren; two great-grandchildren; 34 step-great-grandchildren; a step-great-great-granddaughter; and a sister, Jean Reynolds of Smartsville, California. He was preceded in death by his parents; wife; grandson, Shawn Michael Sample; great-grandson, Quinn Gillmore; and two brothers, Ernest and John. Funeral services will be at 10:00 a.m. on Monday, January 21, 2019 at the Wagler Funeral Home in Bloomfield with Pastor Brad Hansen officiating. Burial will be at the South Prairie Cemetery south of Milton, Iowa. Visitation will begin at 10:00 a.m. on Sunday with the family present to greet friends from 2-4:00 p.m. at the funeral home. A memorial has been established to the Des Moines River Valley Chapter of Serve Outdoors.

The family of Joe Rossi created this Life Tributes page to make it easy to share your memories.

Send flowers to the Rossi family.