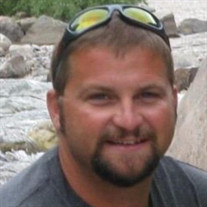 Johnny Lee Gunter Jr., 43, of rural Bloomfield, Iowa passed away on May 26, 2020 at the University of Iowa Hospitals and Clinics after a courageous battle with cancer. He was born January 29, 1977 in Alhambra, California to Johnny Lee and Betty Lou Strickland Gunter. Johnny moved to Bloomfield, Iowa while in high school and graduated from Davis County High in 1995. He attended Indian Hills Community College and graduated from the Machine Technology program. After graduation, he found work at Vermeer in Pella and a few years later went to work for John Deere in Ottumwa which he stayed with until his illness. He was a machinist at John Deere in the experimental department and thoroughly enjoyed working with the guys and the camaraderie they shared. Johnny was also a talented carpenter. He built his current home, remodeled several other homes, and did a great deal of work on projects at his home and the homes of family. On January 21, 2005, Johnny married the love of his life, Angie Cooper, in Las Vegas, Nevada. The two enjoyed marriage for 15 wonderful years; raising children, building a home, and traveling together. Johnny loved packing up the RV every summer and heading west for a couple weeks. He loved the mountains, seeing friends, fishing, hiking, bike riding, and visiting the occasional brewery on the many trips he took out west. He spent most weekends boating and camping at Lake Rathbun with his family. Johnny loved life. He will be missed by all who knew him. He is survived by his wife, Angie Gunter; three children, Kenzie Gunter, Grant Gunter both of Bloomfield, Spencer Gunter of Ottumwa; parents, Johnny and Betty Gunter of Bloomfield; father-and-mother-in-law, David and Susan Cooper of Ottumwa; three siblings, Jack Erwin of Springfield, Illinois, Brianne Gunter, Joey Gunter both of Bloomfield; brother-in-law, Bryan (Christina) Cooper of Ottumwa; and special family, John and Connie Silko of Bloomfield. He was preceded in death by his grandparents, Wallace and Harriet Strickland. A rolling visitation will begin at noon on Monday, June 1, 2020 at the Wagler Funeral Home in Bloomfield with family present from 4-7:00 p.m. Social distancing guidelines of six feet will be followed. Johnny’s wish was to be cremated and burial of the cremated remains will be at a later date. There will be a celebration of life at a later date. In lieu of flowers, a memorial has been established to his family.

Johnny Lee Gunter Jr., 43, of rural Bloomfield, Iowa passed away on May 26, 2020 at the University of Iowa Hospitals and Clinics after a courageous battle with cancer. He was born January 29, 1977 in Alhambra, California to Johnny Lee and Betty... View Obituary & Service Information

The family of Johnny Lee Gunter Jr. created this Life Tributes page to make it easy to share your memories.

Send flowers to the Gunter family.