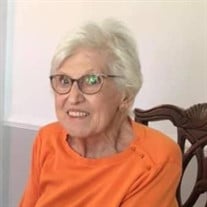 Judith Brunk, 80, of rural Bloomfield, Iowa passed away on June 2, 2022 at the Mercy Medical Center in Des Moines. She was born on September 5, 1941 in Savannah, Iowa to Monte and Ruby Ramseyer Hoskin. She graduated from Bloomfield High School in 1959. On November 25, 1962, she married Ronald Brunk at the Savannah Christian Church in Savannah Iowa. She later went on to raise a family together including two Sons, Kevin and Greg in rural Bloomfield, IA. Ronnie preceded her in death on March 22, 2011, she missed him greatly. As Judy’s family grew, she started work in Ottumwa, first as an abstractor and then on to work at the Clerk of Court in Wapello County before eventually becoming the Clerk of Court for Davis County where she worked for nearly 20 years. She was proud when her granddaughter, Mary-Kate also went into Public Service for the State of Illinois in the Governor’s Office. Judy loved her job and spending time in the community. Through her work, she developed many friendships that lasted a lifetime. Judy loved spending time with her family, especially her grandchildren, Jack, Mary-Kate, and Leo. In addition to her immediate family, Judy was truly lucky to have so much family in the community and loved spending time with them, from cousins and nieces and nephews and distant cousins or families through friendship in the area. Through this community, she always had an invitation to dinner, a place to spend the holidays, or a phone call to keep her engaged. This community made her life meaningful. Judy began playing golf when she began working in Ottumwa and developed a passion for it which carried her throughout life even hitting a hole-in-one on the third hole of the Lancaster Country Club. Her late husband Ronnie eventually had to pick up the game of Golf, just to spend time with her and together they could always be found on one of the golf courses in the area. Judy was a passionate sports fan and literally watched and followed them all. She was a lifelong St. Louis Cardinals fan, despite her son and grandchildren being passionate Cubs fans. She loved the Iowa Hawkeyes and was very happy when her Grandson enrolled there in 2021 to bring another Hawkeye into the family. She also liked to tend to her place in rural Bloomfield, working, working in the yard, gardening and riding her John Deere tractor mowing the garden. Judy was a lifelong Christian. First a member of the Savannah Christian Church which is now part of the Davis County Historical Society and later the Bloomfield Christian Church. The family has asked that her memorial go to the Davis County Historical Society for the preservation of the Savannah Christian Church and the Bloomfield Christian Church. She is survived by two sons, Kevin Brunk of Bloomfield, Iowa, Greg (Moira) Brunk of Newtown, Pennsylvania; three grandchildren, Jack at Misericordia in Chicago, Mary-Kate of Chicago, Il, and Leo Brunk, University of Iowa, her beloved sister, Nancy (Larry) Sample of West Des Moines, Iowa, and a brother-in-law, Gerald (Susan) Brunk of Memphis, Missouri. She was preceded in death by her parents; husband; and brother, Gary Hoskin. Funeral services will be at 10:30 a.m. on Tuesday, June 7, 2022 at the Wagler Funeral Home in Bloomfield with Rev. Leslie Dotson officiating. Visitation will begin at 1:00 p.m. on Monday with the family present to greet friends from 5-7:00 p.m. at the funeral home. Cremation will follow the services with burial at the Savannah Cemetery at a later date. As mentioned, a memorial has been established to the Davis County Historical Society for the preservation of the Savannah Christian Church and the Bloomfield Christian Church.

Judith Brunk, 80, of rural Bloomfield, Iowa passed away on June 2, 2022 at the Mercy Medical Center in Des Moines. She was born on September 5, 1941 in Savannah, Iowa to Monte and Ruby Ramseyer Hoskin. She graduated from Bloomfield High School... View Obituary & Service Information

The family of Judy Brunk created this Life Tributes page to make it easy to share your memories.

Judith Brunk, 80, of rural Bloomfield, Iowa passed away on June...

Send flowers to the Brunk family.