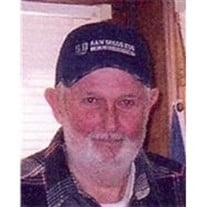 PULASKI: Keith David “K.D.” Richardson, 77, of Pulaski, Iowa died January 16, 2012 at the Davis County Hospital in Bloomfield, Iowa. He was born March 22, 1934 in Wayne County, Iowa to Herbert Eugene and Zina Cleona Hook Richardson. He married Leanna Huffman March 2, 1968 in Bloomfield, Iowa. He served in the United States Army. K.D. was a farmer and also owned Richardson Bros. Feed in Memphis, Missouri for several years. He enjoyed farming, cats, dogs, horses and was active in 4-H while his daughters were growing up. He loved going to the Davis County Fair with his family every year. He is survived by four daughters, Robin, Teresa, Tammy Richardson all of Pulaski, Iowa, Cleona Dillavou of Kirksville, Missouri; three grandsons, Gavin Lee and Reese Andrew Dillavou, Justin David Richardson; his former wife, Leanna Richardson of Pulaski; two brothers, Kenneth (Kathy) Richardson of Bloomfield, Iowa, Norman E. (Lyndell) Richardson of Des Moines, Iowa; two sisters, Mary Ellen (William) Hancock of Manhattan, Kansas, Leona (Robert) Meade of Oxford, Iowa; and 15 nieces and nephews. He was preceded in death by his parents and a brother, Darl “Pete” Richardson. Funeral services will be at 10:30 a.m. on Saturday, January 21, 2012 at the Wagler Funeral Home in Bloomfield with Kramer Smith officiating. Burial will be at the Pulaski Cemetery in Pulaski. Visitation will begin after 1:30 p.m. on Friday with the family present to greet friends from 6-8:00 p.m. at the funeral home. Memorials have been established to the grandchildren or to the Davis County Fairgrounds.

The family of K.D. Richardson created this Life Tributes page to make it easy to share your memories.

Send flowers to the Richardson family.