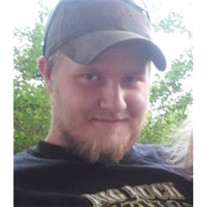 PULASKI: Kyle Lee Garmon, 21, of Pulaski, Iowa died August 21, 2013 at the University of Iowa Hospitals and Clinics in Iowa City. He was born September 6, 1991 in Ottumwa, Iowa to Todd Lyn Garmon and LouAnn Galindo. He married Jessica Johnson April 9, 2010 in Bloomfield. He was employed at Warning Enterprises and was a member of the Pulaski Fire Department. Kyle enjoyed hunting, working on automotives, and playing video games. He loved and cherished his family. He is survived by his wife, Jessica Garmon of Pulaski, Iowa; son, Hayden Parker-Garmon at home; daughter, Aubrie Garmon also at home; mother, LouAnn (Steve) Hinckley of Lexington, Kentucky; father, Todd Garmon of Pulaski; sister, Brittany (Brandon) Witt of Irvine, Kentucky; brother, DeKota Glosser of Cedar Rapids, Iowa; grandparents, Wilfred and Judith Miller of Fairfield, Iowa, Louise Frymoyer of Bloomfield, Iowa; two great-grandmothers, Genevieve Black and Elaine Miller both of Bloomfield; and several aunts and uncles. He was preceded in death by his son, Skyler Parker-Garmon; and two grandfathers, Jerry Garmon and Harold Frymoyer. Funeral services will be at 10:30 a.m. on Monday, August 26, 2013 at the Wagler Funeral Home in Bloomfield with Pastor Jack Knox officiating. Burial will be at the IOOF Cemetery in Bloomfield. Visitation will begin after 9:00 a.m. on Sunday with the family present to greet friends from 2-4:00 p.m. at the funeral home. In lieu of flowers, a memorial has been established to his children’s college education.

The family of Kyle Garmon created this Life Tributes page to make it easy to share your memories.

Send flowers to the Garmon family.