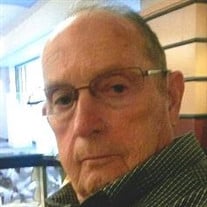 Larry Allan Collins, 77, of Bloomfield, Iowa passed away May 6, 2017 at the Hospice House in Ottumwa. He was born September 26, 1939 in Springfield, Illinois to James and Martha Montgomery Collins. He married Karol Kimball September 18, 1965 in Bloomfield. Karol passed away January 22, 2015. Larry served in the United States Navy after graduating from high school in Illinois. After the Navy, he worked for the City of Ottumwa for a few years before getting hired at John Deere Ottumwa Works. He would later transfer to the Waterloo John Deere Plant until his retirement in 1986. After retiring, he owned and operated the “Collins Café” with his wife for 10 years. The café was located in the Ballingall Hotel in Ottumwa. Larry enjoyed early morning coffee with his “Coffee Club.” He also enjoyed going out to eat with friends, fishing, spending time with family, and swinging by the Can-Dough Redemption Center in Ottumwa to pester his daughter, Leanna. He is survived by his twin daughters, Leanna (Amy Vanderburg) Collins of Ottumwa, Deanna Collins of Bloomfield; two grandchildren, Joe (Shell) Collins, Jenna Ellis; eight great-grandchildren, Passion Matia Collins, Autionna Kay Collins, Savyon Cordova, Kynnick Ellis, Jeff Whiten, Mike Whiten, Haley Vanderburg, Mya Vanderburg; several nieces and nephews; and a special family friend, Sandra Harvey. He was preceded in death by his parents; wife; grandson, Givonni Reye Cordova; two brothers, Mike and Jim Collins; and a sister, Linda Huff. Funeral services will be at 10:30 a.m. on Wednesday, May 10, 2017 at the Wagler Funeral Home in Bloomfield with Pastor Charles Courtney officiating. Burial will be at the IOOF Cemetery in Bloomfield with Reed-Whisler Post #78 of the American Legion performing graveside military rites. Visitation will begin at 9:00 a.m. on Tuesday with the family present to greet friends from 5-7:00 p.m. at the funeral home. A memorial has been established to his family.

Larry Allan Collins, 77, of Bloomfield, Iowa passed away May 6, 2017 at the Hospice House in Ottumwa. He was born September 26, 1939 in Springfield, Illinois to James and Martha Montgomery Collins. He married Karol Kimball September 18, 1965... View Obituary & Service Information

The family of Larry Collins created this Life Tributes page to make it easy to share your memories.

Larry Allan Collins, 77, of Bloomfield, Iowa passed away May...

Send flowers to the Collins family.