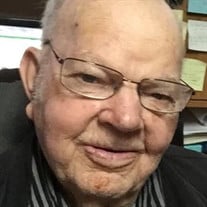 Leo Wayne Allen, 89, of rural Bloomfield died February 12, 2019 at Mercy Hospitals in Des Moines, Iowa. Wayne was born July 24, 1929 in Ottumwa, Iowa to Shickery and Alma Muldoon Allen. Wayne married Rosemary Baker on June 27, 1964. Together they raised three children on their Century Family Farm northwest of Bloomfield. Wayne graduated from Blakesburg High School, Iowa Success Business College in Ottumwa, and Iowa State College in Ames. He served his country for four years in the U.S. Air Force. Wayne retired in 1987 from the U.S. Department of Agriculture which then gave him the time to focus on his love of raising Registered Angus Cattle and running the Wayne Allen Family Farm business. His cattle earned him several state honors throughout the almost 60 years of raising them. Wayne was a member of the Davis County Cattlemen, Iowa Angus, and American Angus Associations along with the American Legion. Besides his love for cattle and his family, Wayne was an avid reader of history, politics, religion, and science. He spent a great deal of time researching his family genealogy. Wayne was a loyal fan of his Alma Mater, always cheering on the Iowa State Cyclones. He was raised in the Catholic Church and had a strong faith which he demonstrated through the way that he led his life. Wayne is survived by his wife of 54 years, Rosemary, sons Douglas Allen and Kenny (Christy) Allen both of Bloomfield, daughter, Kathy (Bill) Castle of Boone, grandchildren, Brandon (Lindsay), MacKenzie, Courtney, and Megan Allen, Katelynn and Eric Allen, and Erin, Ellen, and Audrey Castle. Also, sisters Joyce Rowe of Indianola, Iowa, and Carol White of Warner Robins, Georgia. He is preceded in death by his parents and his brother Paul Keith Allen. Funeral services will be at 11:00 a.m. on Friday, February 15, 2019 at the Wagler Funeral Home in Bloomfield with Father Patrick Hilgendorf officiating. Burial with military rites performed by Reed-Whisler Post #78 of the American Legion will be at the IOOF Cemetery in Bloomfield. Visitation will begin at 9:00 a.m. on Friday with the family present to greet friends from 9:30 a.m. until the time of the service. A memorial has been established to the Davis County Historical Society.

The family of Leo Wayne Allen created this Life Tributes page to make it easy to share your memories.

Send flowers to the Allen family.