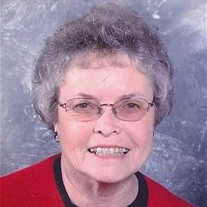 Letha Louise Lawson, 82, of rural Bloomfield, Iowa passed away on June 19, 2018 at the Keosauqua Health Care Center in Keosauqua, Iowa. She was born August 16, 1935 in Des Moines to Louis and Letha Rebekah Whitlock Schaffner. She graduated from Moravia High School in 1952 and on April 12, 1959, she married Ronald Lawson at the Christian Church Parsonage in Seymour, Iowa with her father officiating. The couple enjoyed 59 years together and raised two children, Dennis and Glenice. Letha worked in the Davis County Assessors Office for 30 years and served as the County Assessor for 15 of those years. She was an active member of the Monterey Christian Church teaching Bible School, Sunday School, and playing the piano during church services. She was also a member of the “Welcome Neighbors Club” in the Monterey area. Letha was a wonderful cook and baker. She was especially talented in making pies and loved to teach her grandchildren her secrets. Letha also enjoyed family activities like playing cards and going out to eat. She will be greatly missed by her family. She is survived by her husband, Ronald Lawson; son, Dennis (Carol) Lawson of Bloomfield; daughter, Glenice (Howard) Graber of Bonaparte, Iowa; four grandchildren, Dustin (Kim) Lawson, Clarissa (Kyle) Prevo, Tiffany (Skyler) Howard, Tyler (Sylvia) Wagler; eight great-grandchildren, Gracie, Daylen, and Dalton Lawson, J.D., Lyla, Reed, and Emma Prevo, Ely Wagler, and due this October, Adaline Rose Howard; brother, Bob (Mary) Schaffner; sisters-in-law, Carol, Jerry, and Linda Schaffner, Doris V. Lawson; and many nieces and nephews. She was preceded in death by her parents; grandson, Dyllan Lawson; five brothers, Louis W., Louis V., Horace, Clarence, Bill; sister, Lillie Belle Wyldes; and two sisters-in-law, Daisy and Betty Schaffner. Funeral services will be at 10:00 a.m. on Friday, June 22, 2018 at the Wagler Funeral Home in Bloomfield with Pastor Reg Higginbottom officiating. Burial will be at the Sunset View Cemetery north of Moulton, Iowa. Visitation will begin at 10:00 a.m. on Thursday with the family present to greet friends from 5-7:00 p.m. at the funeral home. A memorial has been established to the family and will be designated at a later date.

Letha Louise Lawson, 82, of rural Bloomfield, Iowa passed away on June 19, 2018 at the Keosauqua Health Care Center in Keosauqua, Iowa. She was born August 16, 1935 in Des Moines to Louis and Letha Rebekah Whitlock Schaffner. She graduated... View Obituary & Service Information

The family of Letha Lawson created this Life Tributes page to make it easy to share your memories.

Send flowers to the Lawson family.